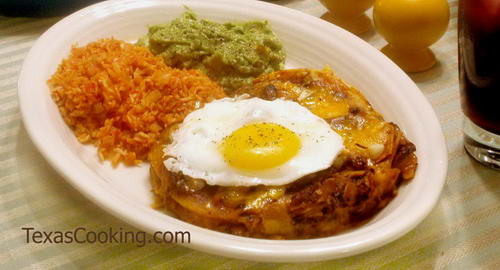 We cooked and photographed this recipe from Lisa Fein's Homesick Texan Cookbook. Assembled like a casserole, stacked enchiladas are much easier to make then the traditional rolled enchiladas. Served with a fried egg on top, these are also referred to as New Mexico Enchiladas.

For the Enchiladas For the Chili Sauce
Preparation: On the side, serve Mexican Red Rice and Refried Beans.

Note: A word about chili powder: The most-recommended chili powder in Texas is Gebhardt's, and for good reason. Also, if you make your own chili powder and can get your hands on some dried chiles pasillas, make some pure ground pasillas, and you'll have an extraordinary powder for Tex-Mex enchiladas.

However, if neither is accessible, you can still make perfectly acceptable and delicious Tex-Mex enchiladas with McCormick's or Durkee's chili powder, or whatever it is that your store carries. If you know nothing whatsoever of chili powder or chiles, then my instructions to you are very simple: Buy a product called "chili powder" -- not cayenne, not crushed red pepper, not ground red pepper.