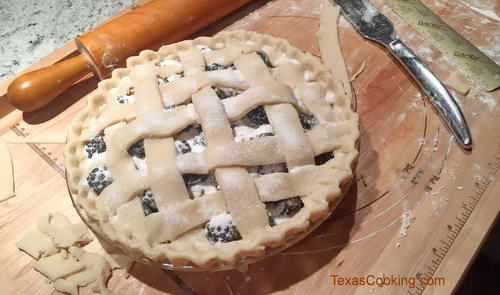 This is a wonderful recipe for pie pastry. It features butter for the best flavor and lard for the apex of light and flaky texture. You'll see a tiny bit of sugar added, too, although not enough to impart sweetness. In this instance, the sugar is there to further the fine texture of this piecrust. See the notes below the recipe for information about sources for lard that is recommended for baking.

The preparation instructions below assume the use of a food processor. I highly recommend this method. It's quick, efficient and does not overwork the dough. If you do not have a food processor and wish to use this recipe, you can certainly hold with the time-honored hand-held pastry blender. This recipe makes two 9-inch piecrusts or one double-crust pie.

For a pre-baked pie shell, once your pastry is in the pan, trimmed and crimped, prick the bottom and sides of pastry with a fork to avoid air pockets developing, and bake in a 425°F oven for 10 to 12 minutes until the crust is lightly browned.

Note:You may not be able to find lard that is suitable for baking in your local supermarket. However, amazon.com has become an excellent source for lard. Leaf lard is probably the finest lard for baking, and Tenderflake lard, a Canadian product, is also very good. Both are available at amazon.com. Lard, incidentally, can be frozen for up to one year.

Conventional wisdom holds, and I agree, that glass (Pyrex) pie plates generally make better pie shells than those made of metal.

The pie in the photograph is our recipe for Grandma's Blackberry Pie.