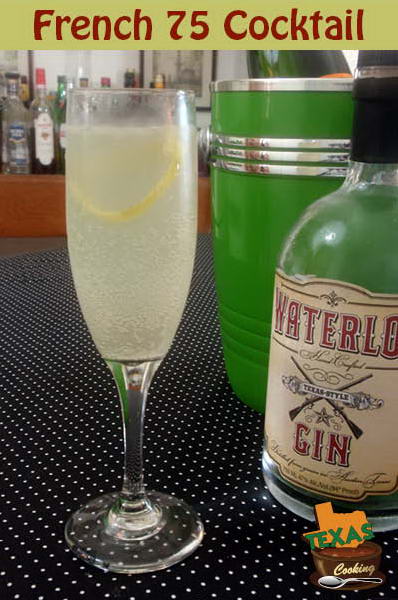 It's hard to beat any classic "New Orleans cocktail," and the French 75 is certainly one of the big guns in this arsenal. Named for the French rapid-firing artillery piece used in both World War I and the Mexican Revolution, it is closely associated with the French 75 bar at Arnaud's in New Orleans. The drink is generally made using gin and champagne. However, somewhere along the way, many cocktail books seem to have eliminated the gin and substituted cognac. Our beloved 1971 Playboy Bar Guide is one such book.

I took this story to University of Texas-trained historians, who theorize that the French 75 is more likely a drink pre-dating New Orleans, and has its roots as an Anglo-French Alliance cocktail, which explains the marriage of British gin and French Champagne.

Cocktail lore is always fun to discuss. In that spirit, we present the French 75 using today's popular combination of gin, simple syrup, lemon juice and topped with champagne in a flute. For grins, we also have the Cognac/Champange version, which we're naming the French 125.

Note: The French 75 is well named. It is tastes very good and is most refreshing; however, it is a deceptively powerful cocktail. Imbibe with care. Use a good gin like Bombay Saphire. For our recipe, we used Austin, Texas-produced Waterloo Gin, brushing aside the fact that the term "Waterloo" is not something that the French would accept with a Gallic shrug.