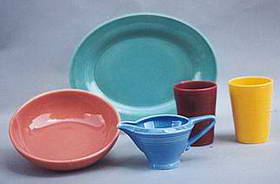 The Homer Laughlin China Company has produced numerous lines of kitchenware beyond their well-known Fiesta ware line. In an effort to sell products to new markets, they introduced a less expensive dinnerware. Although it was first listed on company records in 1936, Harlequin was not actively introduced for public sale until 1938. Harlequin was also designed by the company's potter wizard Frederick Hurten Rhead.

Harlequin dinnerware was sold without trademark through the dime store chain F.W. Woolworth Company exclusively until 1964. During the 1950's, Woolworth's sold it as both open stock and in starter sets. A starter set, according to brochures, consisted of 4 9 1/4" luncheon plates, 4 cups, 4 saucers, 4 5 1/2 " sauce dishes (aka fruit bowl). A starter set in the 1957 Woolworth's Christmas catalog sold for $3.98, an increase from $3.49 in the 1955 catalog. ¹

Over its lifespan, it was produced in twelve different glazes. The original colors were mauve blue, yellow, spruce green and maroon. The maroon is unique, and officially referred to as red. In the 1940s, HLC added red, rose, turquoise and light green. The 1950s ushered in the colors forest green, chartreuse, medium green and gray.

Harlequin proved very popular and sold throughout the 1950's. Official records indicate the line was discontinued in 1964. Woolworth offered a reissue of Herlequin from 1979 to 1982. The newer issue utilized turquoise, coral, yellow and a variation on medium green.

Harlequin was never marked, except for its 1979 reissue. So in order to identify a Harlequin piece, one must compare weight, size and colors. 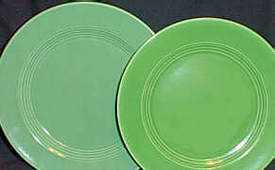