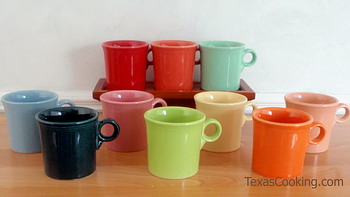 "The coffee cup, I think about you."

One of the true classics in the Fiesta line is the Tom and Jerry mug, which was originally designed by Frederick Hurton Rhead in the middle of 1936. The cup handle with the trademark Fiesta ring pattern elegantly stylized is arguably one of the best industrial designs.

The Meaning Behind the Name

Where does the name "Tom and Jerry" come from? It's not from the cartoon characters. Actually, it is a old fashioned term for drinking mugs, based on an alcoholic drink made with rum and eggs that was popular back in the 1800's. (The Tipsy Texan tells the full story behind the Tom & Jerry cocktail.)

The Tipsy Texan notes, "The cocktail was prominent enough by the 1880's that every bar 'worth wrecking with a hatchet would get down the china Tom & Jerry bowl and the little 'shaving mugs' that went with it.'" And the cocktails popularity persisted into the 20th century. In the 1960 Hollywood classic movie The Apartment, an exasperated Jack Lemmon rattles off to his boss who seeks to use his bachelor pad to entertain a lady, "The Tom & Jerry mix is in the fridge."

The vintage Tom and Jerry mugs were produced in all eleven colors. (The scarcist being ivory.)

Unfortunately, since the original design, times have changed and the cup's small shape, as well as iys tight ring handle, have not translated well into modern tastes. For this reason HLC started production of the Fiesta Java Mug, which is a Fiesta-glazed cup with a large round handle.

Other items for coffee drinkers are the Jumbo Cup and the vastly underappreciated Fiesta Cappuccino Mug.

HLC has produced these in all of the post-86 colors, except Sapphire. They are typically carried in stock at the department stores, and on Macys.com.