How To Make Flour Tortillas

I steeped myself in flour tortillas. 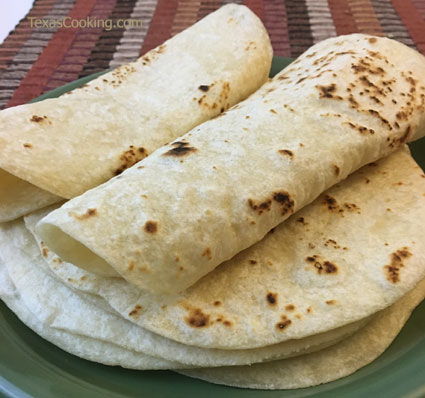 It was inevitable. After the how-to article on corn tortillas appeared several months ago (see How to Make Corn Tortillas, I knew what would follow. The article was well received, but seemed merely to whet the appetites, so to speak, of many readers for the other half of the tortilla equation -- flour tortillas. My dilemma was that I had no personal experience with making flour tortillas and was, therefore, no expert.

After wrestling with the problem (translation: I couldn't find anyone else to do the article), I concluded that our readers could benefit from a novice's experience with making these versatile and delicious flatbreads.

So I steeped myself in flour tortillas -- the thick and chewy Texas kind, the thin and delicate Sonoran type, and many of the spiced and flavored varieties born in the imaginations of creative Southwestern cooks.

To get started, I consulted some cookbooks -- the consistently excellent The Border Cookbook, by Cheryl Alters Jamison and Bill Jamison, the well-written and informative Comida Sabrosa, Home-Style Southwestern Cooking, by Irene Barraza Sanchez and Gloria Sanchez Yund, and the slim-but-informative El Paso Chile Company's Tortillas, by W. Park Kerr -- among them.

My research revealed that flour tortillas originated in Sonora, a northern Mexican state which shares a long border with the US. Mexican cooks there had access to white flour and incorporated it in their tortillas.

These tortillas have real body and taste; they are perfect for gorditas, fajitas and eating out of hand.

Stir together the flour and baking powder in a large mixing bowl. Add the salt and vegetable oil to the lukewarm milk and whisk briefly to incorporate. Gradually add the milk to the flour, and work the mixture into a dough. It will be sticky.

Turn the dough out onto a surface dusted with flour and knead vigorously for about 2 minutes (fold and press, fold and press). The kneading will take care of the stickiness. Return the dough to the bowl, cover it with a damp cloth, and let it rest for 15 minutes. (This dough will not rise, but it needs a rest.)

Divide your dough into 8 balls of equal size, cover them, and let them rest again for about 20 minutes. Avoid letting them touch, if you don't want them to stick together.

Dust your work surface with flour. Working one at a time, remove each piece of dough and pat it into a 5-inch circle. With a rolling pin, roll out the tortilla, working from the center out, until you have a 7- or 8-inch tortilla a little less than 1/4 inch thick. Transfer the tortilla to a hot, dry skillet or griddle. It will begin to blister. Let it cook for 30 seconds, turn it, and let the other side cook for 30 seconds. Remove the tortilla, place it in a napkin-lined basket and cover with aluminum foil. Repeat for the remaining tortillas.

Although flour tortillas, like corn tortillas, are best if eaten right after they are made, these tortillas will freeze well. Wrap them tightly in plastic, and they will keep, frozen, for several weeks. To serve tortillas that have been frozen, let them thaw and come to room temperature, then wrap them in aluminum foil and heat them in a warm oven. Microwaving tends to toughen them.

Rolling out tortillas in perfect circles is harder than it sounds.

Once you get a rhythm going, you can roll out a tortilla, put it on to cook and, while it cooks, roll out your next tortilla. Seems like an arduous process but, with this method, I could produce 8 tortillas in about 10 action-packed minutes. Be sure to rewrap your fresh tortillas each time you add another to the stack.

If you like, you can substitute one cup of whole wheat flour for one cup of the all-purpose flour.

My personal preference is for plain tortillas but if desired, you can spice up this recipe by adding:

If you choose to experiment with seasonings, mix dry spices with the flour mixture and fresh or "wet" seasonings with the milk.

My results with the above recipe were outstanding -- chewy, delicious, irresistible. My experience with the Sonoran variety, however, was less than spectacular.

Sonoran cooks have turned tortilla making practically into an art form. Their tortillas are large (some are pizza-sized), thin and delicate. I followed this fairly standard recipe:

Mix the flour and salt in a large mixing bowl. Mix in the shortening using a fork, a pastry blender or your fingertips. Gradually add the water, working it in until you have a sticky dough. Turn out the dough onto a floured work surface and knead for 2 or 3 minutes.

Allow the dough to rest, covered, for 15 minutes. Then divide it into 6 or 8 balls of equal size, cover, and allow to rest for 45 minutes to an hour.

Roll each ball of dough, between sheets of waxed paper, as thinly as possible (between 1/16 to 1/8 thick) into a circle. Remove the waxed paper from one side of the tortilla, then, carefully, from the other side. Transfer the tortilla to a hot, dry skillet or griddle. Cook for 10 seconds, turn it, and cook for 10 more seconds, then turn again for 10 more seconds per side. Remove the tortilla, place it in a napkin-lined basket and cover with aluminum foil. Repeat for the remaining tortillas.

Making the dough was easy. Making the tortillas was not. My equipment, unlike my skills, was right. Rolling the tortillas into nice circles between sheets of waxed paper was easier than I expected, but my optimism was short-lived. I found that the waxed paper on the first side comes away more easily if you tear it off in one swift motion but, no matter what I tried, I could not manage to coax the remaining waxed paper off the other side without mangling the tortilla or without the little demon drawing up to the size of a sand dollar. Curse that high-gluten flour anyway.

I cooked them, anyway. But, since the thickness of the tortillas wasn't uniform, they didn't cook up very nicely. I consoled myself by eating one of my Chewy Tortillas with butter and salsa, and decided to share my failure with you readers.