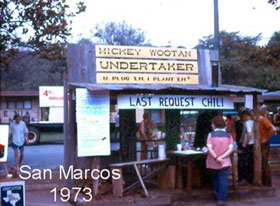 Everything changes, even chili cook-offs and their little adopted brothers, the barbecue cook-offs. Chili cook-offs as we know them began in Terlingua, Texas in the fall of 1967. Terlingua was a ghost town that was 96 miles from the nearest grocery store. The site was chosen for the first chili-cook off as some of the promoters had some Terlingua land they had bought low and were seeking to sell high.

The first chili cook-off had two contestants: Wick Fowler who would represent Texas interests, and H. Allen Smith from up north, who would represent the rest of the world. Both men claimed to make the best chili in the world. The event drew a lot of pre-cooking publicity, as several of the promoters were in the news business.

Three chili judges were there to pass judgment on the creations of the two self-proclaimed "World's Best". One judge voted for Smith, One judge voted for Fowler. The third judge, after sampling Fowler's chili fell to the ground proclaiming severe gastric distress. After being tended, he said his taste buds and been severely damaged and he could not judge. So the first contest was called a draw. The contest was rescheduled for the following year.

In 1968, H. Allen Smith came down with the shingles and was replaced by Wino Woody DeSilva of California. Again, Wick Fowler represented the Texas faction. All went well until after the voting when a masked man with a rifle appeared, stole the ballot box and threw it down a mineshaft. Again no winner.

The following year, 1969, found an increase in the number of contestants vying for the World Championship title. Wick Fowler found himself facing, along with his previous year's opponent Smith, one Woody DeSilva, Indian Chief Fulton Battice from East Texas and a formidable foe in the person of C.V. Wood, Jr., who arrived from California in a double decker English-style bus. Interest in the cook-off was picking up as many news representatives were showing up for the contest and enjoying the sideshows that were forming.

A bare bones show of four people, with assistants, stirring pots of chili on the front porch of a ghost town opera house would have never made national news. However, when the entertainment factor was added, the event fast became national news.

That year, C.V. Wood, with his famous California Chili recipe, was declared the winner, but not without the assistance of the bevy of Hollywood starlets he brought along in his double-decker bus.

The Terlingua chili cook-off continued to do things to attract the working press and the public at large. In 1970, Janice Constantine, the first female cooker, was allowed in. In 1971, C.V. Wood became the first two-time World Champion. In 1974, Allegani Jani Schofield became the first female to win the "Big Un" at Terlingua. From there, cook-offs of the chili variety became the hot number across Texas and surrounding states.

In 1970, the first modern-style chili cook-off, away from Terlingua, was held in San Marcos, Texas. It was an immediate media phenomenon. The event was conceived as a fundraiser to restore Aquarina Springs, San Marcos' prime tourist attraction. By 1974, the cook-off, now known as Chilympiad, had outgrown Aquarina Springs and was moved to the new Hays County Convention Center in San Marcos, and by 1980 it was the biggest cook-off in the world with over 500 contestants.

In 1976, the Bicentennial Year, every little town or big city in Texas had a cook-off of some kind. The majority were of the chili variety. The cook-offs did not become popular because America was enamored with the process of cooking food to make it more tender and flavorful; they became popular because they were unusual and offered a lot of unique entertainment. Of course, it was the showmanship part of the cook-off that was so entertaining.

The Chili and the Showman

When chili cook-offs began, the judges visited each cook to assess his or her prowess with a stirring spoon. The cooks tried to influence the judges with little treats and a discourse on the virtues of their product. The chili heads, as they became known, found it very entertaining to entertain the public. Most of them were very much people persons. They would spend time with the public, and most of what they had to say was comical, including outrageous ingredients for the chili, more outrageous reasons for the outrageous ingredients and just a good spiel. The Chili Heads were pretty much costume freaks, too. That is, they liked to wear things you didn't see just every day. Hillbilly and Cowboy costumes were popular. Occasionally a business suit or a tuxedo would be uniform of the day. The ladies wore costumes to show off their assets.

The costumes led to themes for the cookers. At Chilympiad, there was a team that would build a two-story western saloon front on the grounds, complete with dance hall girls, boot-shining stations and shoot-outs on the hour. There were many teams that had their own sound systems and would hold games for the public to enter. It was a given that the cookers would cook enough chili to have samples for the spectators. All one had to do was ask or most times the cooks offered samples.

The "Big Un" at Terlingua was built on the wet T-shirt contest. Without that, it would have never become the icon it has become.

A lot of the "show" was pretty much R rated. Of course, this was back in the 70's when "R rated" would be preschool rated now. There were plenty of ladies who were more than willing to display their talents in wet T-shirt contests. The "Big Un" at Terlingua was built on the wet T-shirt contest. Without that, it would have never become the icon it has become.

Barbecue cook-offs were the red headed step-children of the chili cook-off world. The first barbecue cook-off was held in Uvalde, Texas in June of 1972. The barbecuers were more laid back and family oriented than the chili people. They brought the family and sat in the shade while the barbecue was cooking. The Houston Live Stock Show had the first big barbecue cook-off in 1974. It was set up to have corporate sponsors. A business would pay the expenses of the barbecue team it sponsored in return for the barbecuers providing barbecue for the company's customers. There were some very elaborate and expensive sites set up, several "cafes" big enough to seat a couple of dozen guests. The Houston cook-off was and still is a big show, but it never attracted a lot of media attention.

In the glory years from 1974 to the mid-1980's, chili cook-offs were very popular. Most of the small-time hometown, chili cook-offs would draw at the least a reporter from the local paper, and most of the better publicized ones could count on at least one local TV crew on hand. ABC sent its top "Americana" journalist, Haywood Hale Broun, to cover the 1974 Terlingua blast. It was shown on the national news.

The proliferation of cook-offs was the beginning of the end for showmanship. There were so many chili cook-offs that they were no longer a novelty. By the mid 80’s, the original hardcore chili heads were growing long of tooth and not really able to keep up the fast- paced entertainment. The showmanship which originally had lasted from the time the cooks arrived at the site until they left was relegated to two hours after noon. That left the spectators about six hours to just wander around trying to get a taste of chili, usually being told either "It's not done yet" or "I can't give samples until after judging."

The cooks altered their recipes to make just two pounds of chili. You take a pint or more of that for judging, and it does not leave much for free samples. We also had the local health departments poking their noses into our chili and barbecue. In a lot of places you could not give samples to the public.

Today, showmanship at a small chili cook-off is as simple as a guy wearing a dress or a couple of members of a team going around and telling jokes to other teams.

Chilympiad, which had over 500 contestants for three years in a row and put a ton of money into the San Marcos economy, has been downsized to the "Texas Men's Championship" and is now held in Johnson City, Texas. They field about 100 teams. A couple of years ago I was there at noon in the show barn where all the vendors were set up. I counted six people there looking at the authentic American Indian jewelry from China.

The only reason the locals go out there is that most of them will serve as judges for the preliminary judging. The cooks judge the finals. There has always been a Friday night party for the cooks. That has evolved into a covered dish supper with BYOB. The big cooks' Saturday night party is a domino party. The cooks are not even cooking chili -- real chili -- any longer. Today their "chili" is a pound of hamburger stewed up with chili spices.

There is one surviving chili cook-off in Texas that retains the original flavor. That is Czhilispiel held every October in Flatonia. They still get a mob of spectators and the cooks are out in the open where you can see and talk to them. They are not all ganged up in a cluster of motor homes uninviting to visitors.

Nothing remains the same. An old thing never likes a new thing.