How to Make Gourmet Pizza 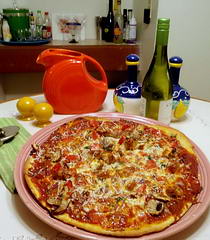 Pizza! It's a word that makes most of us hungry. And what comes to mind when you think of pizza? Is it crispy crust, melted cheese pooled on top of the ingredients, distinct flavors in every bite? No? Perhaps your image is more like thick, doughy crust, stringy cheese and a heavy taste of pizza sauce. If this last description fits you, then you're accustomed to buying pizza -- maybe frozen, maybe delivered, but definitely not homemade.

Great pizzas can be made at home. All that's needed is a decent crust and a little imagination. Try to think beyond pepperoni and mozzarella. A pizza is really an open-faced sandwich and almost any sandwich can be turned into a pizza. As an example, a pizza can be made using leftover ham. Use a pre-baked crust, spread it with mustard instead of a tomato-based sauce, and top it off with Swiss cheese. The combinations are endless.

A gourmet pizza needs only five things - a crust, a sauce, one main ingredient, one extra ingredient and cheese. If too many items are used, the individual flavors are muddled and the pizza loses its pizzazz. Think back to the sandwich idea. You've got bread, mustard or mayo, meat, lettuce or maybe sprouts, and cheese. That's about all you need and it's the same with pizza.

Many of us make sandwiches from leftovers that could easily be turned into a pizza. And if you plan ahead, an extra grilled chicken breast or a couple of pork chops can be saved for a pizza without creating any additional work for the cook.

Pre-baked crusts, available at most grocery stores, will shorten the preparation time for pizza. However, it's also possible to pre-bake a homemade crust. To do so, press out the homemade dough on the pizza pan. Let it rest or rise, depending on the recipe's directions. Then brush the crust lightly with olive or vegetable oil. Punch holes all over the crust with a wooden pick to keep it from bubbling up while baking. Bake 8 to 10 minutes, until the crust is just beginning to color. Remove from the oven and cool until ready to finish the pizza.

Here are a few tips for creating a gourmet pizza.

The pizza recipes that follow are not made with traditional pizza sauce. The ingredients are also out of the ordinary, and each sauce was selected to complement the other flavors. Try one tonight!

Use a pre-baked crust. No sauce is necessary. Brush the crust lightly with olive oil. For the main ingredient, use about 2 cups grilled chicken, cut in small pieces and spread across the crust. As the extra ingredient, thaw a 10-ounce package of frozen broccoli and drain well. Cut the florets from the stalks and discard the stalks. Cut the florets into thin slices and scatter over the chicken. Add salt and pepper to taste. Bake in a pre-heated 400-degree oven for 6 to 8 minutes. Sprinkle with 8 ounces shredded mozzarella cheese and bake about 5 minutes more, until the cheese has melted. Cool 3 minutes and serve.

Use a pre-baked crust and spread it lightly with bottled ranch dressing. For the main ingredient, use 8 ounces of sliced brisket that has not been covered with barbecue sauce. Cut the brisket in small pieces and scatter over the dressing. Slice 3 or 4 Roma tomatoes into rings and drain well. Lay the slices over the brisket and add salt and pepper to taste. Bake in a pre-heated 400-degree oven for 6 or 7 minutes and sprinkle with 4 ounces of shredded cheddar cheese and 4 ounces of mozzarella. Bake about 5 minutes more, until the cheese has melted. Cool 3 minutes and serve.

Use a pre-baked crust and spread it lightly with sour cream. For the main ingredient, wash 5 or 6 small red potatoes and leave unpeeled. Cook in the microwave 6 to 8 minutes, until fork tender. Cool and slice thinly. Place the slices on top of the sour cream. Use chopped cooked bacon or bacon bits for the extra ingredient. Salt and pepper very generously. Bake in a pre-heated 400-degree oven for 5 or 6 minutes and sprinkle with 8 ounces of shredded cheddar cheese. Bake 5 minutes more, until the cheese has melted. Remove from the oven and garnish with chopped green onions, if desired. Cool 3 minutes and serve.

Use a pre-baked crust. For the sauce, combine 4 tablespoons each of sour cream, milk and creamy style horseradish. Adjust the taste to suit by adding more or less horseradish. Spread the sauce over the crust. For the main ingredient, use about 1-1/2 cups of leftover meat loaf, crumbled. For the extra ingredient, use drained, chopped sun-dried tomatoes in oil, or 4 Roma tomatoes that have been sliced and drained. Lay the tomatoes over the meat loaf. Add salt and pepper to taste. Bake in a pre-heated 400-degree oven for 5 or 6 minutes. Sprinkle with 8 ounces of shredded Monterey Jack, mozzarella or Swiss cheese. Bake about 5 minutes more, until the cheese is melted. Remove from the oven. Garnish with chopped fresh basil leaves, if desired. Cool 3 minutes and serve. As a variation, this pizza can also be made using 4 ounces of crumbled goat cheese. Omit the other cheese entirely.