It's the time of the year when the triple-digit temperatures start to dwindle here in Texas. Children go back to school, and fall is just around the corner. September always makes me think of apples.

How do apples relate to Texas cooking? 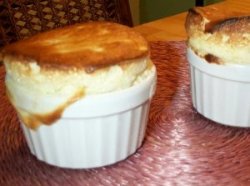 Apples are not native to Texas, but a food item does not have to be native to a land to be part of that land. For centuries, apples have been a staple in France, Germany and even Spain -- nations whose cultures are planted deep in the soil of Texas, making it the melting pot that is Texas.

When we think of apples as a dessert, we usually think of pies and tarts. But, the fruit is so versatile that I want to suggest some different ways to enjoy them. There are many different varieties of apples, more now than I recall from my childhood. The flavors and textures can differ greatly. Braeburn, Granny Smith, Red Delicious and Fuji are a few types found in supermarkets today. And because there are so many varieties, I am going to concentrate on three of them for the recipes I am using today. Two of them are my personal favorites because of their texture and flavor. The third is a variety I wanted to try a bit more.

Granny Smith apples have been cultivated for at least 140 years. They are green in color, varying from light to dark. Their origin traces to a mess of French crabapples that were tossed out in Grandmother Marie Ana Smith's Australian garden. She nurtured the sprouts from those crabapple seeds and the rest is history. The recipes I am making with Granny Smith apples today are a Granny Smith Sorbet and part of the mix for the Cast Iron Apple Pie. It happens to be my favorite type of sour apple with firm texture. One of my buddies from culinary school would sprinkle a little salt on a slice of a Granny Smith, and it would bring out a new taste dimension of this great apple.

The Royal Gala apple has in its heritage Cox's Orange Pippin, a wonderful old-fashioned English favorite, and both Red and Golden Delicious in its family tree. It has a gold base with red in stripes or in masses on the skin. I discovered it when I was working in the Grand Canyon. I was going on a mountain bike ride and wanted a snack for the road. It is such a clean, crisp, fresh and juicy apple that I was able to go a few more miles after I ate it. I am using this type in the Cast Iron Apple Pie, and you can also use it for the Poached Apple dessert.

The Ginger Gold apple is the last of the three apples. It is a new variety to me, and is a beautiful green like the Granny Smith with some gold and a red blush to it. These apples were discovered in a Virginia orchard in the foothills of the Blue Ridge Mountains. It is possibly a cross between Golden Delicious and Pippin apples. It, too, is a firm fleshed juicy apple. And the really great thing about it is that it can be put in almost any apple recipe. It holds well for both baking and cooking.

The first recipe today is something I was thinking about when talking to my friend who used to go camping with me in the Grand Canyon.

With today's camping supplies, it's not hard to bring along a small folding oven to fit your camp stove. You could also use a traditional cast iron Dutch oven with the lip on the lid to hold hot coals. Food tends to taste better when cooked outdoors. A warm and delicious meal at the end of the day is always looked forward to at the campsite. This recipe is for the campers or tail-gaiters, but it can also be made at home for a nice easy "pie." The crust is omitted for simplicity of preparation at the campground. The topping and filling should be prepared in advance at home and packed into separate containers for the cooler.

For the filling: For the Streusel Topping:

For the filling, melt together the butter, spices and the sugar in the cast iron skillet. Add apples and cook until tender, about 15 minutes. For the topping, put the dry ingredients in a mixer and add the cubed butter. Mix until it is crumbly, then add the diced apple and shredded cheese. Put the topping on the filling in the pan and bake at 350 degrees for about 15 minutes or till the top is golden. You can use any kind of firm apple for this.

If you are like me and LOVE ice cream, I have a couple of recipes for you. The first is a sorbet. Sorbet, Granita and Sherbet, oh my! What is the difference you ask? Well, sorbet is the French term for sherbet. Sorbets differ from sherbets in that they almost never contain milk or milk products.

Granita is the Italian word for ice, and it usually more granular than either sorbets or sherbets.

Bring this to a boil and let boil until soft ball stage is reached, which is about 230 degrees. If you do not have a candy thermometer, you can just let the sugar boil for about 10-15 minutes. This is what is known as a simple syrup.

If you use a blender instead of a juicer, go ahead and leave the skin on, but remove the cores. Add the sugar mixture to the strained liquid or the juice and pour into an ice cream maker. Run the mix until set which, depending on your ice cream maker, could take about an hour or more.

If you have an ice cream maker that decides to not work like mine did last night, add one frothy egg white to the liquid and put it in a plastic container and place that in the freezer. Stir it about once every half hour. Serve when ready, it can keep in a tightly stored container for up to six months.

Put the heavy cream and cinnamon sticks into a sauce pan and bring to a boil. Let boil for about 10 minutes. Then add the following ingredients:

Bring this to a boil then add 1-½ tablespoons ground cinnamon. Remove from heat and chill until ready to use. I use this sauce in two ways mainly. One is to use as a topping for ice cream, and the other is as a sauce for the Poached Apple dessert. Remember to stir it up before serving and you can also heat in the microwave to serve it hot.

The last two dishes are the adventurous recipes, a little challenge for everyone, but not hard to make at all.

In a pan, heat the liquid with the cinnamon stick, anise seed and vanilla bean to a slow boil. For the liquid you can use a liqueur, wine, fruit juice or even water that is flavored. Add the apples and poach them for about 10 minutes or until tender. I would use a good firm apple like a Granny Smith or the Ginger Gold. When done, let them cool and place the apples in their liquid in a container in the fridge and chill until ready to serve.

There are several ways to serve this dish. You can place the two halves on a plate and drizzle it with the cinnamon sauce and a dollop of Chantilly cream. Or scoop some vanilla ice cream into a bowl, place an apple half on top, then drizzle some of the cinnamon sauce on top.

My last dessert is also my favorite. It is light and airy with tiny bits of apples inside.

This makes six small souffls or one, seven-inch souffle.

Mix these two ingredients together to form a smooth paste. This is called a Beurre Manie or kneaded butter.

Bring the milk and sugar to a boil and add the Beurre Manie, whisking until a thick smooth paste has developed. Remove from heat and let cool. You can pop the pan right into the refrigerator. In another bowl, blend together the following ingredients:

When the milk paste has cooled, add the egg yolk mixture. This is the base for the soufflé. It can be held, tightly wrapped, for about a week in the refrigerator.

Whip the egg whites until frothy and then add the sugar. When it has achieved a soft peak, it is ready to be folded into the base mixture. The whipped whites do not have to be a totally incorporated; you can have it looking marbleized and it will still rise nicely.

You should prepare the soufflé dish or dishes by first buttering them, then putting sugar inside to coat the dish. This idea is similar to buttering and flouring a cake pan, except you are using butter and sugar. This is so the souffl will have something to cling to as it rises -- kind of like a mountain climber needing the rocks of a mountain to reach the top.

The souffle mixture is poured into the prepared dish or dishes all the way to the top and the top is smoothed. Bake at 375 degrees for about 30 minutes for the single, large souffl, or 15 minutes for smaller, individual ones.

Just remember, the only thing limiting your ability to create new dishes is your imagination and someone to eat the mistakes. For this I give thanks to my Dad, Dave and Johanna!

Dorothy Sibole is a pastry chef living in Austin, TX. If you have questions about this article or the recipes, contact us at moc.gnikoocsaxet@nibrof_solkim.