Best laid plans, but not as intended. 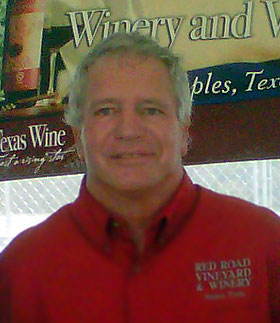 This wasn't the way it was supposed to turn out.

When Merrill Grove, an artist by training and inclination, and his wife Loretta Kay, moved to east Texas in 1991, they accidentally got into the real estate business. There were lots of vacant houses around, but none of them were for rent. Seeing an opportunity, the Groves started buying, renovating and renting properties in Naples, Texas.

Grove, a California native, was surprised he had to drive to a liquor store to buy beer or wine in Texas, instead of just picking it up at the supermarket the way he had in Sacramento. "That takes an hour out of your life," he explains. "We had purchased some land that was just covered with wild grapes, so I started using them to make wine."

As often happens, hobby turned into habit and then into obsession. Grove took a couple of enology courses at Grayson County College, the only winemaking courses available at the time in Texas, and began toying with the idea of opening a winery.

The Long and Winding Road

In 1999 he planted real wine grapes, Cynthiana, Chardonel and two varieties of Muscodine. "I chose those grapes because they don't taste so twangy," he says. "That was around the time the Texas legislature was very pro-wine. I started doing a little research and learned a little about viticulture."

In 2003 the Groves bought an old rundown 1890 ice house along Front Street. The husband and wife team began renovating the place as they had done others around town, while continuing to putter around with wine making. When the Texas legislature made it legal to sell wine to the public in 2005, Grove got his winery bonded. He joked with his wife, "We either need to put on Dairy Queen hats or open a winery."

Not everything went according to plan though.

The winery dream got derailed when Loretta Kay developed breast cancer in 2005. "I had just gotten my bond when she was diagnosed," Grove recalls. "She was in remission for a couple of years, but everything around the winery just stopped."

When Loretta Kay died in the spring of 2007, Grove lost interest in the business they had planned to open together.

"The day after I brought Loretta home from the hospice the Texas Alcoholic Beverage Commission inspector came out to look over our operation. There were lots of things that needed to be done, but I wasn't interested in doing them.

"The inspector was kind of smug about it. She told me to fix this or that and she'd come out and inspect it again. I told her to either write me up for noncompliance or give me my permit. I wasn't in the mood for any attitude. She went ahead and gave me the clearance I needed."

"Most of my wines have Gaelic names. The Las is our best seller by far."

Even with permits in hand, Grove didn't proceed with development of the winery. Finally, months after his wife's death in the spring, he reassessed his life. "It was kind of a necessity that I do something. I was just hanging around doing nothing. We were in pretty good shape financially, so I didn't have to work, but I wasn't doing anything. One day was just like the next and I was just sitting around. Loretta Kay told me before she died that I needed to keep working on the winery but, without her, it was kind of meaningless."

Grove took his late wife's advice and went back to work on the winery, opening it to the public in late 2007. Loretta Kay still plays an active part at Red Road. "She's in a lot of the wines. The Cabernet, the Merlot, Chenin Blanc, White Zinfandel all have L.K. on the label," Grove says.

Red Road's best seller is the sweet blush, Las. "Most of my wines have Gaelic names. The Las is our best seller by far. It is made with Muscadine grapes and is just a nice, smooth wine that's not sharp or twangy."

Grove, who likes fruit-forward wines, stores most of his in steel tanks, minimizing the influence of wooden barrels. "My barrels are neutral, but I only use them for some of the reds. There's not much wood in most of my wines. I've tried it, and people prefer the wines a little brighter.

"My wines can stand alone or be served with food. The sweeter wines pair up well with hot Mexican or Thai food. The reds can stand up to big flavors like barbecue."

Capacity at Red Road is 5,000 gallons a year, a target Grove is approaching cautiously. "I'll probably do 4,000 gallons this year. I'm a laid back, slow-going kind of guy, so I'm not going to grow too quickly. There are a lot of fair-sized wineries out there where the owners have other jobs to sustain them. I don't have that. This is all I do."

Even though it's not the way Grove intended to operate his winery, he's surprised at how much easier it is than he expected. "Going from hobbyist to profession, you still go through the same process, just on a larger scale. And so now, instead of using hand-operated, small-scale equipment, I'm using larger, automated tools. So making 500 gallons is almost easier than making five, because of the machinery I'm using. It takes the same amount of time, the same process.

"Loretta asked me one time, 'What if it goes bad? We've got 500 gallons of it.' I told her we'd just call it vinegar and double the price."