Competition chili is designed for one purpose. Eatin' chili is a delight. 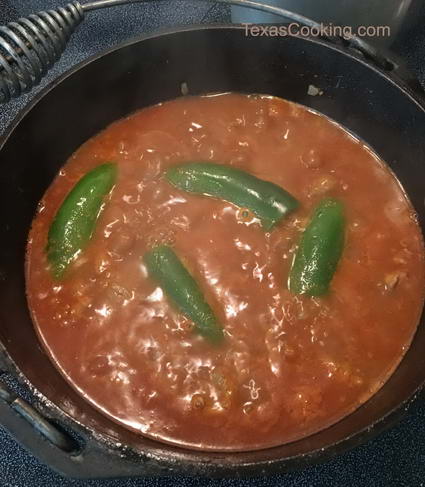 Chili, the official dish of the State of Texas, enjoys its biggest day the first Saturday in November. Hundreds of chili cooks from all over will converge in the vicinity of the old ghost town of Terlingua, Texas for the annual competitions to determine who is the best chili chef of the year.

All the hoopla about chili started in 1967 as a publicity stunt to promote the book, A Bowl of Red, authored by Frank X. Tolbert, a columnist for the Dallas Morning News. Tolbert and some of his friends from the Chili Appreciation Society International arranged a competition between H. Allen Smith, a noted writer, and Wick Fowler, another journalist and Texas chili ambassador. The much publicized event ended in a draw and a pledge to renew the competition the following year.

The rematch in 1968 never took place as Smith was stricken with the hives. In his place, Woodruff "Wino Woody" De Silva of Cucamonga, California, head of the Cucamonga Chapter of the Chili Appreciation Society International, met Fowler. This competition also ended with no winner being chosen after armed, masked men stole the ballot box and threw it down an abandoned mine shaft nearby.

In 1969, the first official World Champion Chili Cook was crowned. C.V. Wood, who is best remembered for moving London Bridge to Arizona, claimed the prize.

For some unknown reason this strange contest in the old ghost town captured the imagination of the world. Tolbert reported that the first contest in 1967 was attended by 209 chapters of the Chili Appreciation Society International. Thousands of spectators have flocked to Terlingua each year since then just to experience the one-of-a-kind show.

Things will be a little different with the 31st anniversary of the competition. Politics has divided the chili world into three factions. The International Chili Society based in California holds its championship cook-off in Reno, Nevada in October. The Chili Appreciation Society International's Rancho CASI de las Chisos cook-off is held down the road from the old Terlingua site. The Frank X. Tolbert-Wick Fowler Original Terlingua Memorial Cook-off is held up the road, behind the store from Terlingua.

The California faction split with Tolbert in 1975. The division of the Texas CASI organization came in 1983. All three cook-offs are well attended and offer three or four days of non-stop entertainment that some consider R-rated.

All three cook-offs require that their contestants qualify by winning one or more contests sanctioned by their organization. For more information contact:

Competition chili is designed for one purpose -- to win chili competitions. It's not something you would whip up to serve the family on Saturday night. It varies from Eatin' Chili in that it contains more chili spices than Eatin' Chili and it will contain a lot more salt than Eatin' Chili. It will not contain any "secret" ingredient. The meat will be a good lean beef diced into small cubes. The competition chili chef's winning depends on having good, fresh spices.

Eatin' Chili is a delight. There are thousands of recipes for chili. They fall into several categories: There is "Texas Style" chili, no beans thank you; chili with beans, red or pinto; green chili, made with the green chile pods; and stuff called chili but really ain't.

The novice chili chef would do well to find a basic chili recipe of the type he or she prefers. Then the chef can vary the recipe to suit his tastes. A good place to start with Texas chili would be Wick Fowler's 2-Alarm Chili Kit available nearly everywhere. Chili fixins can be obtained from Amazon Gourmet & Grocery.

Beans with chili, just add a can of beans to your 2-Alarm kit. Stuff called chili -- you're on your own here.