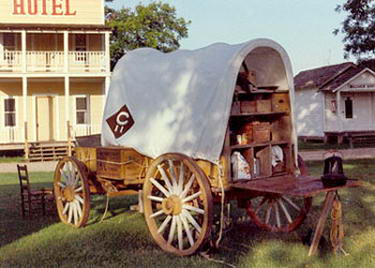 Last month we began telling the story of how the cowboys on the big cattle drives got fed and taken care of on the long trip to the cattle buyers.

In the beginning, it was pretty much every cowboy for himself. The cowboy carried food with him on his horse. It was very simple fare, usually some hard biscuits or corn pone. And there was some coffee and salt. Everything else had to be obtained along the trail. With the invention of the chuck wagon and the employment of a traveling cook, life on the trail got a lot better. The rolling cafeteria and mobile headquarters served many purposes other than just food. The camp cook was the cowboys' den mother, too.

The cowboys had fresh beef available all the time. The problem was there was no refrigeration, and a beef produced more meat than the crew could consume before it began to get too old to eat. Another thing was the beeves were money on the hoof. The ranchers didn't care for the trail crew eating up the profits. It was said the ranchers did not like the taste of their own beef. So, they would kill a neighbor's beef when necessary, and the neighbor would do in kind. The animals selected for slaughter were not from the prime stock. The selection was made from the animals that could not keep up the pace of the drive or just weren't likely to bring a good price at the end of the drive.

The cook or his representative often traded beef with farmers or other settlers along the way for vegetables, eggs or what there was.

Son of a Bitch Stew

There was one beef dish that was unique to the American cattle drives. That was -- excuse my French -- Son of a Bitch stew. If a woman or a preacher were in camp, the stew might be called SOB. It finally became Son of a Gun stew, which was more appropriate for tame society. It was also called by the name of any person or thing that was out of favor at the time. If there was someone from a West Texas town that was out of favor, the stew might have been called "the gentleman from Odessa".

No matter the name, the stew consisted of all parts of a young calf except the hide, horns and hooves. The standard ingredients for the stew were just from the calf. The heart, liver, brains, sweetbreads, tongue, marrow gut and pieces of tenderloin made up the stew. The marrow gut is a tube that connects the two stomachs of a calf that has not been weaned. It contains a substance resembling marrow. The marrow gut is what gives the SOB stew its principal flavor. The liver was used sparingly as too much would make the stew bitter.

The marrow gut is what gives the SOB stew its principal flavor.

SOB stew was made by putting small pieces of fatty meat in the Dutch oven and rendering the fat out of it. Next went in the heart, as it is a tough cut of meat. (All the parts were cut into small pieces.) The tongue, which had been skinned, went in next. The rest of the ingredients were added in small amounts so they could cook as they went in. (You just didn't just dump everything in the pot and go watch TV.) Water was added to the stew only when absolutely necessary. The juices of the meat were usually the only liquid required. The brains were the last to be added. Usually they were cooked separately with a little flour and then added to the pot as thickening.

People who should know say that SOB stew was popular with the trail hands as it provided vitamins that were not contained in the everyday fare of beans and biscuits. If you pay attention, your body will tell you what it needs. The cowboys would develop a craving that only SOB stew could satisfy. (One-a-Day vitamins had not yet been invented).

The most popular way to prepare everyday beef on the drive was to just fry it. Suet was rendered in the pan, and the steaks were given a coating of flour and put in the pan with the lid on and cooked well done. The old westerners did not take to rare meat.

Occasionally the cook would take a large roast and cook it pot roast-style in a Dutch oven. If he had onions and potatoes, they would be added.

The beef available on the trail drives was mostly tough and required a long cooking time. Dishes like the pot roast and SOB stew required three to four hours to cook. The long cooking recipes were prepared when the cowboys were in camp. There was not enough time on a regular day to get it done. When moving. the cook had to prepare meals in an hour or two. That included finding wood or chips and starting a fire.

There was an occasional dessert on the trail. Fresh fruit traded for along the trail and canned peaches could be the basis for a variety of sweets. Pies or cobblers would have been the most prevalent. A biscuit with molasses would have been a quick and easy dessert.

Canned tomatoes were another cowboy treat. They went well with any meal, and a can of tomatoes could slake a thirst better than water when a puncher came in from a hot and dusty day. Often a cowboy who expected to be away from camp a day or so just took a couple of cans of tomatoes instead of a brown bag lunch.

I will wind this up with a recipe that is as close as you can get to a chuck wagon meal in your kitchen.

Soak the beans overnight. Cook for one hour. Drain off the water.

Brown the roast in the fat in Dutch oven. Add peppers and onions and cook until tender. Add beans and remaining ingredients.

Coda: This is an actual description of the trail menu. It is from an oral history done back in the Great Depression.

Our food run strong to whistle berries (beans). They were the red Mexican variety of beans. They were good food and fine while on the drift (trail) or on the range but, while in camp -- not so good. In the dog house (bunkhouse) it became whiffy on the lee side at times. Next in line was son-of-a-gun stew. It was made of everything but the hide an' horns of the critter, but our cheater (cook) slipped in a horn at times. [We?] so accused him of it. We always had a good supply of sop (water gravy), which was made out of bacon grease, flour, water an' a little pepper an' salt. There was always a good supply of lick (as in lick your plate), either of the black molasses or sorghum brand. [but?] of the [sorghum?] an' bacon [grease?] we made our Charley Taylor (dessert). The only butter we ever saw was the Texas brand -- that was the good old bacon grease. Now, you understand that we always had all the meat we call for. The yearlings were handy and also antelope. The black coffee was always ready when we wanted a tin full. The bread was sourdough gun wadding an' often we were treated to saddle blankets. You greeners (tender foot) call it griddlecakes. The chuck was plain, rough food, but good. The cowhands always had plenty of leaf lard on their ribs.