Oyster Dressing from my Louisiana Grandma

You say oyster. I say dressing.

On a recent clear summer day, while enjoying a delicious lunch of succulent, breaded oysters and the tastiest coleslaw, listening to a soothing acoustic guitarist on a garden rooftop, wearing a sweater to ward off the chill in the air (okay - you can tell I wasn't in Austin), I came to the realization that, other than the temperature, I could easily have been in Austin.

But I wasn't. I was in Vancouver, British Columbia, at one of Canada's best restaurants, Joe Forte's Oyster Bar & Grill. 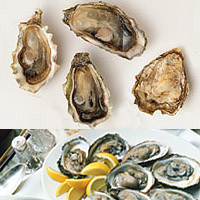 Vancouver residents are passionate about oysters. In fact, while ordering oysters on-the-half-shell, we were able to choose oysters from specific local bays. This got me thinking about Texas oysters. We have, along our own Gulf coast, some of the best bay oysters in North America. Upon my return to Austin, I decided to look into Texas oysters more thoroughly and rediscover them for myself.

The first thing I learned is that fresh and natural seafood consumption, including shellfish, is on the rise in Texas and nationwide. Contrary to popular misconceptions, oysters are extremely low in fat, cholesterol and calories, while being high in minerals such as calcium, magnesium, zinc and selenium. They are also an excellent source of Vitamins A, B1, B2, B3, C and D. Four or five medium-sized oysters supply the recommended daily allowance of iron, copper, iodine, magnesium, calcium, zinc, manganese and phosphorus. Oysters also are a good source of protein at 17 grams per serving of five, and the National Heart and Lung Institute suggests that oysters are an ideal food for low-cholesterol diets.

Now that you're convinced of the nutritional benefits of eating oysters, let me convince you of just how delicious they can be. Oysters on the half-shell taste well enough on their own, but a squeeze of lime or lemon can bring out their crispness -- especially if you are enjoying them with a glass of Chablis. In Vancouver, they were served with a raspberry-lemon sauce, but if I want a sauce at all, I prefer the traditional tomato and horseradish sauce we Texans have long enjoyed. (Listen to me calling myself a Texan. I'm originally from Louisiana, but have been in Texas long enough to consider myself a "converted Texan."

Fortunately, my Louisiana grandmother passed down her recipe for oyster dressing to my mother. Her original, hand-written copy, which my mother had framed for me, hangs on the wall in my kitchen. I never got to meet my grandmother, but my mother would make her oyster dressing every year at Thanksgiving and Christmas. I brought this traditional family dish to a Thanksgiving celebration here in Austin a few years back, and it is requested year after year. The dish is simple yet delicious because of the availability of fresh oysters here in Texas.

From time to time you hear warnings about not eating clams, mussels, crabs, lobsters and other shellfish unless they are alive when cooked. This is a flavor issue and has nothing to do with food safety. Shellfish do not become toxic when they die. But for best flavor, it important that shellfish, including oysters, be as fresh as possible.

It is a myth that shellfish should be eaten only in months with an "R" in them. In the United States, this is not true. Certain European oysters clutch their young in months without an "R" (that would be April through August), which makes them less palatable, but this does not apply to oysters in the U.S. Other myths surrounding oysters have to do with oysters being an aphrodisiac (they're not), oysters increasing your IQ (not unless you can find one with really good teaching credentials), and never eating oysters with milk (my mother used to tell me this one). All of these myths have been found to be untrue, but have been passed down from generation to generation, and I hear them quoted all the time.

At holiday time, I will continue to make my grandmother's Oyster Dressing which I am proud to present below.

This dressing can stand on its own as a main course, or it can be served as a side dish or as you would serve dressing with any holiday meal.

Drain the liquid from the oysters into a medium bowl. Add the breadcrumbs to the liquid. Set aside.

Roughly chop the oysters and set aside.

Over low to medium heat, sauté the onion until soft and transparent, about 5 minutes, then add the green bell pepper and sauté a few minutes more. Add the chopped oysters and minced garlic. Let cook a few minutes, then add bread with the soaking liquid. Let the mixture cook slowly, stirring occasionally, until all the soaking liquid is gone. Remove from heat and stir in the beaten egg.

Check seasonings and add salt and pepper, if desired.

Transfer dressing to a heatproof casserole dish and bake in a preheated 350°F oven for 10 to 15 minutes.