Dry as a kiss from Grandma 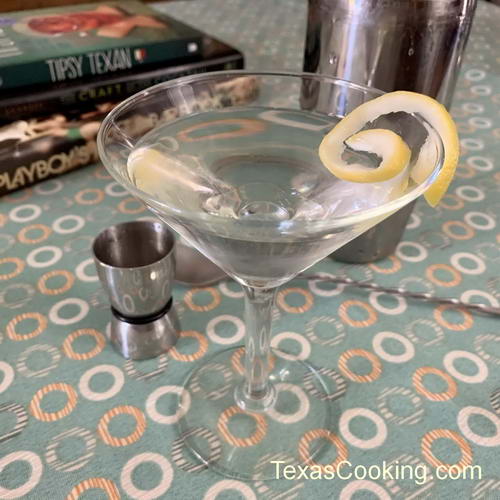 It is the drink of businessmen. In television's Mad Men, viewers thrilled watching advertising executives closing significant deals over a three martini lunch. (Notably Roger Sterling!) But that was the Sixties. Does anyone do three martinis at lunch anymore? One or two martini sessions thrive today as a drink for anyone seeking to savour something simple, something stylish.

Twentieth century socialites consumed martinis at endless cocktail parties, or perhaps during the occasional idle afternoon. Playwright Noel Coward was never found without a tuxedo and a full martini in his hand. Consequently, the characters in his plays spend a significant amount of time making and drinking martinis. Today, the martini is considered by some to be America's most popular hard-liquor drink.

In truth, martini's are a 19th Century invention. According to Dale Degroff in The Craft of the Cocktail, the Martini & Rossi Vermouth Company tajes credit for the name, since they not only sell the drink's defining ingredient but also marketed a bottled dry martini in the 1890's. Vermouth became widely available in the 1870's as the drink sweetener of choice, made with a base liquor plus bitters.

One story describes Standard Oil Baron John D. Rockefeller being introduced to the cocktail in 1910 while a regular patron of John Astor's Knickerbocker Hotel bar, which at the time was one of the world's grandest bars. The pushy bartender was a fellow named Martini di Arma di Taggia, and Rockefeller's prestige and social influence helped make the martini a favorite among the Wall Street set.

Martinis have spun off into every imaginable style and taste. A bourbon martini is a Manhattan. In Texas, the hip restaurants serve an all-tequilla drink called the Mexican Martini.

Traditionally, the gin martini is made by combining gin with vermouth in a cocktail shaker and stirred. (This is why owning a long-handled bar spoon is a critical compnent of any bar.) For the traditionalists, using Plymouth Gin goes back to the early 1900's. If you have never made martinis with it, it's worth buying a bottle. After all these years, it still makes a fantastic martini.

By the time the 1920's and 1930's came around, people commonly drank the Nick and Nora Martini style, which was 3 parts gin to 1 part dry vermouth. (Nick and Nora were characters in the popular Thin Man movies from the 1930's and 40's. A married couple who solved murder mysteries while drinking throughout the film, these are all very fun movies.)

This is our recipe for the perfect gin martini.

Fill in a mixing glass with ice and stir well. Strain into a chilled martini glass. Garnish with either an olive or a lemon peel.

What about a vodka martini? Simple! Just make the recipe above with a good vodka.

What about the martini glass? Into the Sixties, martini glasses typically held four to five ounces. The small size kept the contents cold for a long period of time as you sipped it. Time has marched on and today's Bacchanalia culture has spawned increasingly larger glasses, along with frosted colors and different shapes.

Nowadays, a five to six ounce glass is perfect with the 5.5 ounce glass being the sweet spot. I still prefer the clear martini glass. The perfect martini is something you should see through.

Since the Sixties, vodka rapidly overtook gin as the martini base liquor of choice. And why not? James Bond drank them! Ian Fleming described James Bond's martini in the book Casino Royale as The Vesper, named after Vesper Lynd, the heroine from the novel. The actual recipe was created by London-based bartender Gilberto Preti, and given to Fleming.

(as created by Ian Fleming)

Notice that the Vesper is shaken, not stirred. Shake with ice and strain into a large champagne glass. As the Bond series of novels continued, Bond shortened his martini recipe to "Vodka, very cold. Very large. Shaken, not stirred."

"I never have more than one drink before dinner. But I do like that one to be large and very strong and very cold and very well-made."

Whose Brine Is It Anyway?

Oh, olives! Either you love them or you hate them. When ordering a martini, the bartender typically asks whether or not you want it "dirty". A dirty martini has several drops of olive brine in the drink. Franklin D. Roosevelt popularized the dirty martini. The interesting thing about that is his counterpart across the Atlantic, Winston Churchill, at the very same time insisted on martini drinks to be dry with no vermouth or olive anything.

Of course, the olive chosen for the drink makes an impact. The perfect olives for martinis are Castelvetrano olives. These Kermit the Frog-green olives are from Italy and have a buttery flavor. There is no red pimento. You can buy them in jars, or if you have access to a grocery store with a full-featured olive bar, buy some there.

More martini historical lore: The olive was allegedly added by another Manhattan bartender, Robert Agneau, who used it to conceal the raw taste of American gin and vermouth.

The shaker is always an interesting aspect to martini lore. Today, shakers can be purchased new or old at garage sales, antique stores, or second-hand shops. Some people have made collecting shakers into an interesting hobby.

They come in metal or glass, in literally all styles and shapes. One collectible is a Penguin-shaped shaker from the 1930's. Socialites revered the penguin, with its permanent tuxedo suit, to be a symbol of success and affluence. These would have all been happy parts of the bars in the Great Gastby or Throughly Modern Millie.

Vermouth is an herb-flavored wine fortified with brandy. Dry vermouth is white, while sweet vermouth is red. Traditionally the light vermouth was French vermouth, while Italisn vermouth was sweet, heavy and red. Some books with old cocktail recipes ake these references, but both types are made in France and Italy, and elsewhere. Remember, the dryer a martini, the less vermouth.

If you are making a Vesper martini, Lillet is a French aperitif wine. It's sold in two varieties, red and white, and is typically placed near the other fortified wines like Dubonnet and Port. Lillet has a subtle orange flavor that is quite good, making it an under-appreciated mixer for cocktails.

A gin martini with a cocktail onion is called a Gibson. Roger Sterling closed numerous deals in Mad Men drinking Gibsons. Cocktail onions are sold in jars. Store them in the refrigerator after opening.

Many martini recipes call for orange bitters. Not Angostura bitters, which are paired with bourbon drinks like Manhattans and Old Fashioneds, orange bitters are the perfect touch with the flavor of citrus is needed, such as in a crisp, cold gin martini.

Control the strength of your martini by diluting it with water from the ice. Crushed or cracked ice melts faster than cubes in the shaker. Room temperature vodka instead of chilled melts at the same rate. Remember too that longer you shake the drink, the more the ice melts.

The clear taste of the base liquor is critical for a martini. If your tap water has a strong taste, consider making ice using bottled water.

When enjoying this most royal of cocktails, let's all keep in mind Humphrey Bogart's alleged last words, "I should never have switched from scotch to martinis."

Ode To A Tanqueray Martini

Found on the Internet

(adapted from Winston Churchill)
Stir gin in a cocktail shaker with ice until very cold. Turn toward the direction of France and bow, after which strain into a shallow glass and garnish.

So there you have it. Martini recipes, history and lore wrapped up in the dashing, stylish cultures of world leaders, spy movies and high society mystery sleuths, and then neatly poured into a small, clear, cold glass. Cheers!

This article was researched in part with the excellent The Bartender's Bible, by Gary Regan.