The old tales about chicken soup are true, and hot soup in particular has numerous health benefits. 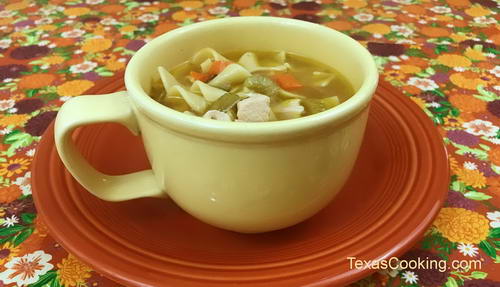 I used to read the story "Stone Soup" to my kiddos and always got a big lift out of the moral: people in hard times coming together for the common good. That's how life actually is in our little town of Lockhart, especially during hard times. But just as the story of stone soup might warm your heart, soup in general will warm the rest of your insides, and continues to be the folk medicine most often used to cure what ails us. So, let's take a closer look at the folklore and then we'll cook up some great soup, and I'll tell you how to store the leftovers!

As the civil war version of "Stone Soup" goes, three soldiers, hungry and weary from battle, came upon a small village. The villagers there were suffering through poverty from the war and a meager harvest that year, which inspired them to hide what little they had to eat. As the soldiers met up with them, the villagers complained over the lack of food to share. The first soldier turned to the village elders and said, "Your fields have left you with nothing to share, so we'll share the secret of how to make soup from stones."

Well, those villagers were pretty intrigued and helped set a fire under the town's biggest kettle as the soldiers dropped in three stones. "This'll be a fine soup," said the second soldier, "but a pinch of salt and some parsley would make it even better." Up jumped a villager shouting, "What luck! I just remembered where some's been left!" And off she ran, returning with salt, parsley and a turnip. As the kettle boiled, the memory of the villagers quickly improved and soon carrots, potatoes, beef and cream found their way into the pot.

The village elders praised the soldiers. "You have given us the greatest of gifts: the secret of how to make soup from stones, and we'll never forget." The third soldier replied, "There is no secret, but one thing is certain. It's only by sharing that we can make a feast."

So, that's the story of Stone Soup. Now, since y'all are in yonder-land reading this, and I'm way over here, I thought I'd share some soup with you by passing along a couple of our family recipes. But, before I do that, let me tell you why soup is so darn good for you and why chicken soup in particular is used more often than not to help fight off colds and flu

The old tales about chicken soup are true, and hot soup in particular has numerous health benefits. As opposed to frying or boiling vegetables and meat, which can destroy half of the vitamins, the slow simmering of soup gently pulls out the therapeutic properties of food, and preserves the nutritional value.

Soup also helps restore your body's necessary water balance, which in turn helps keep your blood pressure under control while its anti-inflammatory effects help lessen the symptoms of colds and flu. Plus, soup doesn't require as much energy to digest, which leaves your body free to fight infection.

Your body responds to the inflammation of an infection by sending white cells to the area. But the white cells have little affect on viruses that cause colds or flu. Unfortunately, that doesn't matter to the little troopers because they're trained to fight. But, when masses of them rally together, they end up causing the production of mucus, which results in a stuffy head, coughing, and sneezing.

Here's where chicken soup joins in the battle. Some studies show that white blood cells migrate less often in the presence of chicken soup. Fewer white cells in the respiratory tract means less mucus, which means less coughing, sneezing and stuffiness. Plus, the steam from the hot soup helps clear up congestion. And, when you're not feeling very good, you're less apt to eat a well-balanced meal needed to keep up your strength. That's why we call in the soup troops. They're full of veggies, broth and soft pieces of meat that are easy to eat, digest, and soothe your system at the same time.

But you don't have to limit yourself to just chicken soup. Tomato soup is another member of the cavalry. I bet you didn't know that tomatoes get their red color from lycopene, an antioxidant that's the most potent carotenoid in fighting eye and heart disease, as well as cancers that affect the prostate and cervix. Since our bodies don't produce lycopene naturally, we have to eat it. And because we absorb lycopene better when tomatoes are cooked or processed rather than raw, tomato soup is the way to go! Tomatoes are also rich in potassium and Vitamin A, and one tomato can provide you with forty percent of your daily Vitamin C requirements, something you really need during cold and flu season.

Now, you may already have a favorite family recipe, or you can try one that I've included, but here's some tips on storing the leftovers. Once you've made your soup, allow it to cool gradually and then put it into the refrigerator for the remainder of the cooling process. When it's finally cool enough to store, place it in covered plastic containers with at least a half-inch space below the lid, or heavy-duty ziplock plastic bags with a plenty of room to easily close and reopen. Be sure to label the contents and note the date when it was made. According to the USDA, freezer-stored soup maintains its optimum flavor for two to three months, but you can safely keep it for up to six months. (See also John Raven's article on homemade cold remedies.)

When you're ready to thaw, place the soup into the fridge overnight, or set the container in a sink filled with warm water. To reheat, remember to use a medium-low heat to maintain the nutritional value and keep soup ingredients with dairy products from separating.

Now, go cook yourself up a pot of Stone Soup, and don't forget to share!

Place chicken stock into a large pot and warm over medium-low heat. Melt butter in a large skillet and add onion, garlic, celery, carrot, parsley, salt, pepper and cubed chicken, sautéing for 5 minutes. Pour the chicken mixture into the broth and allow to simmer for 20 minutes. Add Grandma Hill's Homemade Noodles (recipe below) or packaged wide egg noodles to the soup and stir. Continue simmering for another 25 minutes. Serves 6 to 8.

Mix dry ingredients together in a bowl. Break eggs into center of the ingredients, and stir with a fork until well blended. Lightly flour a cutting board and rolling pin. Break off a large handful of dough and roll into an oblong shape about 1/4 inch thick. Using your hands, gently roll up the dough and then slice into 1/4-inch pinwheels. Unwind each pinwheel and tear into the length that you want. Set aside and continue the process until all of the dough is used up. Place a handful of noodles into a boiling pot of water and briefly stir to break noodles apart from each other. Allow noodles to boil until they float on top of the water (about 20 seconds). Remove the noodles and continue until all of the noodles are cooked. Cooked noodles can be drained and frozen by placing into ziplock freezer bags or tightly covered containers for 2 to 3 months. Defrost when ready to use.

Options: Try adding a teaspoon of garlic powder, onion powder or powdered chicken bouillon to the dough for extra flavor.

In a large soup pot, heat 2 tablespoons of the olive oil over medium-high heat and sauté onions until clear. Add tomatoes and chicken broth. Bring to a boil and reduce heat to low and simmer for 20 minutes, stirring occasionally. Add remaining 2 tablespoons olive oil, water, basil, garlic, lemon juice, salt and pepper to the mixture and continue to cook over low heat for an additional 10 minutes. Makes 8 to 10 servings.

While the soup is cooking, place jalapeños, garlic, salt and sour cream into a blender and blend on low speed. After pouring the soup into bowls, drizzle about 1/4 cup of the jalapeño cream over each bowl of soup. Makes 8 to 10 servings.