The Boiling Pot Is a Rockport Hot Spot

The only things we cook in advance is the gumbo and the rice and beans. 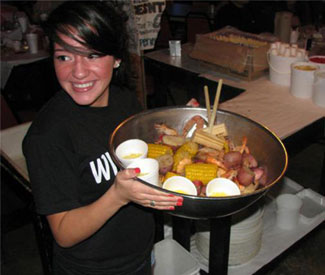 Dot LeBlanc is one of the few people surprised at the success of The Boiling Pot restaurant in Rockport. She never expected what she describes as "a little oyster shucking shed" to last 25 years. And she certainly never thought it would be so successful she'd end up opening a second location in Austin.

"I thought it would last a couple of weeks. My friends would all come by for dinner and that would be about it."

Her lifelong dream went far beyond that. What started out almost as a dare in 1985 has turned into a family business going on its third generation.

It began while LeBlanc was buying the fresh catch of the day from the shrimp boats along the pier in the 1980s and reselling it to tourists and distributors. "People would buy raw shrimp from me and ask, 'Where can we go to get good boiled shrimp?' I thought to myself, 'Hmmm, I can boil shrimp.'

"We'd have friends over and boil up some shrimp or crawfish and serve it and we'd just have a blast. They would all tell me I should open a restaurant. I'd always wanted to own a restaurant but I was scared to death to actually do it. But I finally let them talk me into it. We had a little shack on the beach and one of my sons kind of cleaned it up a little and we opened the restaurant."

While the recipes have remained the same for 25 years, the restaurant hasn't. LeBlanc moved to a larger location across the street a few years ago. With seating for 75 indoors and a large patio to accommodate the overflow, LeBlanc estimates she now goes through 250 pounds of shrimp on a good day. The Boiling Pot also has a separate building known as "The Beach House" where it hosts private parties.

"We make everything to order. The only things we cook in advance," LeBlanc explains, "are the gumbo and the red beans and rice. They're better the next day."

Part of the success of The Boiling Pot is the spice blend LeBlanc developed with the help of some of her shrimp distribution network partners in Louisiana, and part of it is the laid back atmosphere of the restaurant.

The name says it all in this case. There aren't any fried shrimp or baked fish at this waterfront spot. If you eat here, it's going to be something boiled; and boiled Cajun style at that. The Boiling Pot features white tablecloths but don't get any ideas about snooty waiters and fancy service. The white tablecloths here are made of butcher's paper, and the food is dumped directly from the pot onto the table. It's a do-it-yourself affair where patrons are given a mallet and a bib and told to go at it.

"I remember the first time one of my waitresses served a meal," LeBlanc says with a laugh. "She was carrying a pot of boiled shrimp, crabs and crawfish and asked me, 'What do I do with this?' I told her to just spill it out across the table. She just stared at me. 'Are people really going to eat that?' she asked. Sure enough, they've been eating it for 25 years."

It's that kind of no-frills attitude that earned The Boiling Pot a "Best Seafood Dive in Texas" crown from Coastal Living magazine. It's a title LeBlanc wears proudly. "We were in the very first issue of Coastal Living, and then we were featured in Southern Living about five years ago. I'm very proud of that," says the mother of three.

LeBlanc's son, Dave, is running the business's second location. While the Austin version of The Boiling Pot does a steady trade, customers are more seasonal at the Rockport site. But even with the feast-or-famine aspect of life on the Gulf coast, LeBlanc has never regretted her decision to open her eatery. "We get busy around spring break and then for the entire summer. We also have some winter Texans and, of course, we get a lot of bird hunters during the season. You have to love what you're doing and I really do love this. I've met and worked with some wonderful people over the years. I wouldn't trade my little business for anything.

"I've got a couple of granddaughters who visit during the summer and they just love it. So the next generation seems to be coming along. It looks like we'll be around that long at least."

In a large bowl, stir together the sugar and mayonnaise. Add the carrots and cabbage, and mix until well coated. Serve chilled.