Okra Is OK, with Recipes 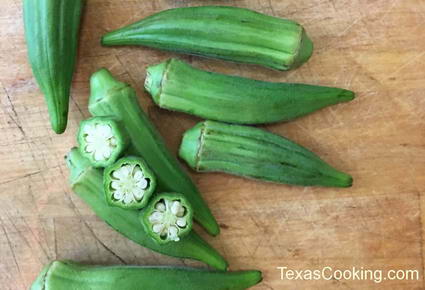 As the Texas days grow warmer and longer, the okra bushes grow taller and begin to put on their lovely yellow blooms and their delicious seedpods. A Texas garden is incomplete without its row of okra.

Okra has been around a long time. It probably originated in West Africa and, from there, it covered lands far and near. Most likely okra came to the Americas with the slaves.

Okra plants have a strong central stem with large green leaves. At the junction of each leaf stem a blossom will emerge and produce the okra pods. Given good conditions, okra can grow to a height of six or seven feet. It is definitely a warm weather crop.

Okra pods should be harvested when they are young and tender. A pod no more than four inches long is ideal -- any longer and they become tough although there are some varieties now with pods that remain tender up to about six inches in length. If okra is hard to cut with a sharp knife, its too tough for cooking.

Harvesting okra has to be done by hand. Its not a nice job. The plants have prickly hairs on them and attract all manner of insects. Best to wear long sleeves and gloves when you cut your okra.

If you are buying your okra, look for small, green pods. If the pods have a lot of black and brown spots on them, pass them by. Best place to find okra is at farmers market where fresh produce is brought in every day.

Frozen okra is okay for stews and gumbo, but the breaded okra for frying is at best a poor substitute for the real thing.

Its not a lot of trouble to work with fresh okra. First thing when you get your okra home is to wash it in cool water. Dump it in a sink of cool water or large bowl. Swish it around to remove any debris. Drain it in a sieve.

You cut the stem end off all the pods. On the small pods, you can leave the small end or tail. The tail gets tough on larger pods.

Cut the okra pods into half-inch slices -- about two cups of slices for this recipe.

Put about a half-cup of flour in a brown bag. Dip the okra slices, a few at a time, in the buttermilk, and then drop them in the flour bag. Shake until they are coated with the flour.

Beat the egg with the salt, pepper and cayenne in a large bowl. Add the okra slices and stir until all are coated with egg. Slowly add the cornmeal and mix until the slices start to stick together. Deep-fry the clumps of three or four slices until golden brown. Drain on paper towel or in a brown paper bag. (If you are cooking a large quantity, put the bag in a good-sized warm pot. That way you get the grease drained off and keep the okra warm all in one operation.

My mother made the most delicious gumbo. I never knew it could be made any other way until I was full grown and out in the cold world.

In a suitable pot, saut a large chopped onion in a little bacon grease until the onion is transparent. Add two cups of sliced okra and a large can of stewed tomatoes. Bring to a boil and simmer until the okra is tender. Salt and pepper to taste. This really goes great on a bed of long grain rice.

There are as many gumbo recipes as there are cooks. Theres seafood gumbo, chicken gumbo, shrimp gumbo, sausage gumbo and on and on. The only things common to all the recipes are okra and roux. Ive judged a few gumbo contests where everyone made seafood gumbo. Most were an abomination. I think they just dumped a can of tomatoes in a bait bucket and boiled it.

The roux is made by stirring equal parts of lard or oil and flour in a hot skillet until the mix turns a dark brown. Dont burn it. If you burn it, you have to start all over.

The gumbo is started by sauting onion, garlic, bell pepper, and celery until its limp. Water and tomatoes are added plus anything else that is in the recipe. The roux is added and stirred in to thicken the mix and it gives a good flavor boost. (You can use some roux in Mamas Gumbo, but dont tell Mama.)

When everything is nice and tender, the gumbo is served over rice. Mighty good eating on a cool evening.

Boiled or "stewed" okra can be a delicate subject. When okra is boiled it gets mighty slick. Some folk just cant abide the texture, although the taste is great. I think a couple of tablespoons of vinegar might cut down on the slickness. Using whole baby pods about two inches long works best for boiling. Season with a little bacon grease and salt and pepper.

Lots of folk like their okra pickled. Its an easy process if you want to try it.

Boil this mix for ten minutes.

Pack baby okra in suitable canning jars. To each jar add a Jalapeño pepper, a clove of garlic, and a bit of fresh dill weed. Pour the hot brine over the okra and seal. Let it set a couple of weeks to come to full flavor.

This should satisfy your okra tooth for a while. I'm checking on a recipe for okra fritters that I'll pass on to you as soon as I get it finalized.