If You Love Chicago Deep-Dish Pizza, Thank A Texan 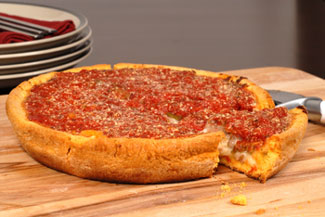 When thinking about great pizza, most of us envision some little restaurant with checkered tablecloths in Brooklyn or Chicago, but there's a big difference between the thin-crust New York-style pizza and Chicago’s deep-dish pizza. What's more, a Texan had something to do with it!

The deep-dish pizza became a Chicago icon in 1943 when partners Richard Novaretti (better known as Ric Riccardo), and native Texan Ike Sewell opened their restaurant, which was first named The Pizzeria, then Riccardo's Pizzeria, and finally Pizzeria Uno.

Born in Italy, Riccardo was a ship's mate, painter, dancer and musician who eventually made his way to Chicago where he sold his paintings and tried working a number of straight jobs before opening Riccardo's restaurant and speakeasy.

At the opposite end of the spectrum, Sewell came from the small Texas town of Wills Point and went on to become an All-American football star in 1924 at the University of Texas, where he graduated and then joined up with American Airlines. Several years later he changed careers and became a liquor distributor in Chicago where he met Riccardo, and the rest is pizza history, only no one seems to know for certain the whole story.

According to Chicago historian, Tim Samuelson, there's been a long-standing debate as to which of the partners actually invented the final deep-dish recipe. Samuelson states that some people credit Riccardo for the idea and Sewell for its fame.

As the story goes, Sewell and Riccardo's plan to open a bar & grill had one problem – what kind of food to serve. Sewell wanted to feature Mexican food, but when Riccardo became sick after eating a test enchilada, he wanted nothing more to do with Mexican food, and suggested serving something called pizza.

Well, Sewell gave it a try but complained that the thin-crusted pizza was more of an appetizer than a meal. He countered with a suggestion that they create a more substantial, meal-size pizza, which was more in line with the budget-stretching, one-dish casseroles made popular during the depression and post-war era. Once again, if a Texan didn't invent it, they're apt to make it bigger and better.

The two men set out to experiment with a variety of crusts, cheeses and other ingredients, and finally came up with a thick crusted, deep-dish, weighty wonder made by placing cheese over the bottom crust, covering that with the toppings and finishing it off with the sauce. Now they had to convince their customers to try it, which was a whole lot harder than they thought. For some reason the Chicago crowd shied away from the beast so, Sewell shifted gears and started giving away free slices to everyone at their bar, and this time the idea took off.

From there, the deep-dish pizza's popularity grew. Twelve years later, and one year after Riccardo's death in 1955, Sewell opened a second bar and grill, Pizzeria Due, just one block away from Uno's. And, within another ten years, Sewell completed his dream by opening a Mexican food restaurant named Su Casa, which was considered the first upscale Tex-Mex restaurant in Chicago, all of which led to Sewell becoming one of the best-known restaurateurs in Chicago.

With the Chicago deep-dish pizza gaining popularity, numerous franchising requests were offered, and in 1979, Sewell signed a franchise agreement with Aaron Spencer in Boston, which has led to the opening of over 200 Uno Chicago Grill Restaurants worldwide, including one in Fort Worth.

Although there was a time when Uno's shipped pizza across the United States, when I recently spoke with Kacey Bogue, Senior Hospitality Representative with Uno's, she stated that the restaurant quit shipping their pizza six years ago due to problems with proper deliveries and concern for the health of their customers.

Now, if you're a stickler for trying a true Chicago pizza, there's a restaurant almost as popular as Uno's called Giordano's and they ship throughout the U.S. This pizzeria advertises stuffed pizza, which is only slightly different from the deep-dish by having a little less crust and more cheese.

Larry and I tried Uno's and Giordano's while we were in Chicago, and can testify that both are great. But here's the really good news – you don't have to leave the state or have one shipped to try a Chicago-style pizza; Texas has its own!

Kennedy's Chicago Pizza is located in San Antonio. The owner is a native of Illinois and was well known for his pizzas long before opening his restaurant in San Antonio in April of 2009. Kennedy says that his pizza is deep-dish and constructed differently than anywhere else with ground meats placed on the bottom crust, a layering of cheese over the meat, then sauce, vegetables and a final topping of sliced meats.

Another Chicago-style pizzeria in Texas is Mangia Chicago Stuffed Pizza, with three locations in Austin and one in Round Rock. In 1977, co-owner Jeff Sayers spent time in Chicago while going through OSHA training and fell in love with what he refers to as "real" pizza. In fact, in 1985 Jeff left his government job as an OSHA Inspector to learn the Chicago pizza business first hand. Feeling confident, Sayers chose Austin as the location for his first Mangia Restaurant in 1988, and one year later received the first of many awards, "Best Pizza in Austin" by The Austin Chronicle.

Ten years later, Jeff took on partner, Mark Negro and together they have continued to earn awards (spanning two decades) from numerous publications. Mangia has also been the answer to a question on the television game show Jeopardy and featured in the movie "Man of the House" with Tommy Lee Jones. In 2005, Mangia was named "National Independent Pizza Company of the Year" by "Pizza Today", the leading trade publication for pizza and Italian cuisine, and in 2006 made its way onto ESPN 2's "Cold Pizza Show" showcasing their football-shaped pizzas. More recently, in November of 2008, Mangia partnered with Meals on Wheels and set a new Guinness World Record for the longest chain of pizzas measuring 1023 feet. Now that's a mouthful!

And by the way, Mangia will ship pizza wherever you live.

So, there you have the whole pizza! And, just a word to the wise when ordering, don't let your eyes get bigger than your stomach; these pizzeria owners state that the average person can only eat 1-1/2 to 2 slices.

In a large mixing bowl, dissolve the yeast and sugar in water. Next, add the corn oil and blend. Add the flour and salt and mix thoroughly. If using a stand mixer, mix for 4 minutes at medium speed, until the dough is smooth and pliable. If kneading by hand, knead for 7-8 minutes. Turn the dough out of the bowl and knead by hand for two additional minutes. Add olive oil to a deep bowl. Place the dough ball into the bowl and turn it twice to coat it with the oil. Cover the bowl with plastic wrap and a kitchen towel.

The average deep-dish pan is 12-inches around. Since most of us only have the 8-inch or 9-inch cake pans, if you don't care about shape, you can substitute the 12-inch pan with a 9x13x2-inch pan or a 12x12x2-inch pan. When the dough is ready, spread and push the dough ball across the bottom of the pan and up the sides.

If you don't feel capable of or are willing to undertake scratch dough, substitute a 1-pound loaf of frozen bread dough, thawed of course.

In a mixing bowl, combine the tomatoes, oregano, basil and Romano cheese. Set aside.

Bake on the middle rack of a preheated 475°F oven for 20 to 25 minutes until crust is golden brown and pulls away from the sides of the pan. Allow pizza to rest for 3 or 4 minutes before cutting and serving.