Competition Cooking: Staging Your Own Cookoff

Let's Put on a Cook-Off! 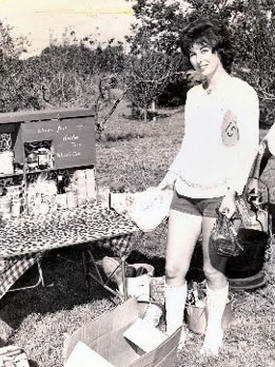 You want to have a little fun this spring or summer and maybe make a couple of dollars for your favorite charity while doing it? How about putting on a little cooking contest? Nothing big and fancy, maybe just you and your neighbors or your club or your church organization. If you don't make it too complicated, it can be an easy and enjoyable way to spend a day or an afternoon.

"What kind of contest?" you ask. "Anything," I answer. You can contest for the best barbecue, chili, vegetable soup, ice cream, chicken salad, beans or salmon patties. One crowd-pleasing contest is the annual Peach Jamboree in Stonewall, Texas, featuring everyone's favorite -- peaches.

Judging can be simple. You just select a couple or three people to be judges. Each contestant puts his or her dish on the table and the judges come by and sample it and give it a score. The dish with the highest score is the winner.

When you decide to have a cooking contest, the first thing to do is remember K.I.S.S. (Keep it simple stupid). The next thing is to put someone in charge of the whole shooting match. You need someone who can make a decision and stick with it. Give that person a couple of assistants.

Now you need to decide what, when and where. What to cook, when to do it and where the contest will be held. You don't need Arlington Stadium; your backyard will be just fine.

In the keep-it-simple mode, you could have your contestants bring their dish already cooked and ready to judge. You get a little more complicated when you have the cooking done "on site".

How to Raise Money

Okay, where does the money come from? Best way to raise the most money is to let everyone be a judge. Votes for the favorite dish are one dollar each, or two dollars or whatever the market will bear. The contestant that raises the most money is the winner. Of course, some of the contestants will vote for themselves, but that money spends just like the other. Put a voting box in front of each contestant. A taste costs a dollar; votes cost more.

You can also put a reasonable entry fee on the contestants. Five or ten dollars would be in order. Another way is to have a judge auction. Folks who want to judge these delicious samples can bid for a judging ribbon.

Here's where the first "You gotta" comes in. You gotta make sure each contestant brings enough of his or her sample to give everyone at least a taste. If you have 40 judges and a pint of ice cream, someone won't get a taste. Also, if you are doing a regular judging, you have to make sure that one judge doesn't eat the whole sample.

Another fund raiser is the Tasting Kit. For a couple of bucks, you get a bowl, dish, spoon, fork or whatever is required to taste the dish de jour. The owner of the tasting kit can then go around and get a sample from each of the contestants.

Here's the next You Gotta. Make sure your prospective tasters know this is a tasting, not a supper or a dinner. I've seen folks show up at a barbecue contest with a pot demanding enough barbecue to feed the family.

The success of your contest depends on several things. First of all, the contestants have to be made happy. Without them you have no contest. This does not mean you have to cater to outrageous whims. Just treat them with the courtesy they deserve. Have some nice awards for the winners. They may smile and say "Thank you" for a cardboard prize your second grader hand lettered, but they would rather have something they can display in their home with pride. Doesn't have to be a trophy. A nice little plaque with the proper inscription works well. Your local trophy store will have a lot of stuff for you to look at.

The visitors to your contest have to be treated well too or they won't come for your next one. First and foremost you want to be sure everyone can get a taste of what's being contested. Next they will want a place to sit down for a little while. Some shade is nice if it's hot. Protection from the wind if it's cold. A place to go to the bathroom is way high up on the list of things to have. Rent a Porta-Potty if you don't want them tracking through your house.

When you get ready to stage a really big contest, things get more vexing. First thing you want to do is check with your Health Department to see if such a thing is allowed in your domain. Nothing causes as much excitement as having a Health Department official show up claiming you are trying to poison the whole population.

Lead-time is important. You can't put together a good show in a couple of weeks. If you want to have professional contestants, you need to post your date at least six months in advance. A year is better. Getting your contest sanctioned by a sanctioning body will let you get assistance and advice from them. You might look up the Kansas City Barbecue Society for barbecue contests and the Chili Appreciation Society International (CASI) for chili.

Lead-time is important. You can't put together a good show in a couple of weeks.

Advertising your contest is important, too. If it's a legitimate charity, you can get some free radio and TV time. Inviting local personalities such as the mayor, chief of police, TV weatherman or your local food writer can get you some good free publicity.

It is a good idea to attend a couple of cooking contests to get a feel for what is involved. Ask questions. Be nice. When you get your contest set, visit a couple of like contests and personally invite folks to come to your affair. Get some little flyers or handbills printed and hand them out.

Whatever kind of contest you decide on, you can bet the farm there will be someone who is unhappy with the way you are doing things. Don't let them ruin your day. Be polite but firm with your actions.

Now you have the most basic knowledge of how to do a cooking contest. Give it a try. Might be more fun than you thought.