Cast Your Irons in the Fire

Dutch oven cookery has gained a real following as outdoor cooking grows in popularity. It's an ancient method of cooking. When man learned to cast bronze and iron, first he made bells. From the bells, it was a short step to cannons, and then on to all the other things that are made of cast iron.

The bell ringing armies moved on their stomachs, so the Dutch oven might be considered a weapon of war. That's all mostly behind us now. But the Dutch oven should be in every cook's store of cooking pots and pans.

It's about time to define what a Dutch oven really is. A Dutch oven is a pot made of cast iron. There are "Dutch oven"- style pots made of aluminum and stainless steel, just to make my job more difficult. But a Dutch oven designed for outdoor cooking is what we're talking about here.

Dutch ovens come in various sizes, and will have "feet" on the bottom. (I guess most everything with feet has them on the bottom.) The top will have a raised lip so that hot coals may be stacked there and not fall off. This is known as a "coal top".

Cast iron is the preferred material for this cookery because it is very durable. You can find Dutch ovens that have been in active service for generations. The biggest enemy of cast iron is improper care. It must be cleaned and properly stored after every use.

The reason cast iron becomes "non-stick" is that a layer of carbon from the fat used in it builds up and fills the pores of the metal. A properly cured cast iron cooker will be as non-stick as the best Teflon. When you purchase a new cast iron cooker, be sure to get the directions for curing the piece, and follow them. If you buy a used piece, you may have to clean it before you put it in service. Over the years, carbon will build up inside and outside the cooker. I've seen it a quarter of an inch thick on some old iron.

The best way to clean used iron is to burn it out. Put it in the coals of a big campfire and let it heat to red-hot. Then let the fire die out and, when the piece is cool, the carbon will brush off. If the fire chief frowns on you building a big fire on the patio or in the backyard, you can put the piece in a gas grill and turn it on high for a couple of hours, and then let it cool. Commercial oven cleaner will work, but it's a long process. I recently received some advice from a Texas Cooking reader who said to take the piece and spray it real good with oven cleaner. Then seal it in a heavy-duty plastic garbage bag for a couple of days. The carbon should then wash off with a spray from the garden hose. I haven't tried that yet, but it sounds reasonable. After you get your used piece clean, cure just like it was new.

When purchasing a piece with a lid, make sure the lid fits tightly and doesn't wobble. A good seal is needed for the oven to work properly. Some go as far as lapping the lid in with valve grinding compound to get a perfect seal. 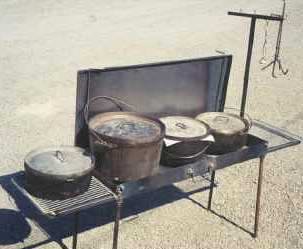 Using a Dutch oven on an open fire is a learned science. There are no low, medium or high settings on a pile of coals. It takes experience and good advice to make a Dutch oven chef.

Let's see if we can get you on the road to proper temperature control so you don't make a mess of your first attempt at Dutch oven cookery.

First of all, use charcoal briquettes instead of real coals since the bricks are uniform and each puts out about the same amount of heat. Start about three dozen briquettes as you would for grilling. When all the bricks are gray, they are ready, not before.

Dutch ovens come in sizes from eight to sixteen inches in diameter. Yeah, I know. Your grandpa had one big as a No. 2 washtub. But we're going to start with a middle of the road twelve incher.

You need a fireproof flat place to set your oven. Make sure it's in a place where the kids won't be running through every five minutes and out of the path of wayward clumsy adults. Place eight to ten of the bricks on the ground evenly spaced, which will be covered by the bottom of the oven. Put your oven in place and make sure it's fairly level. Let it warm about five or ten minutes before you put the food in it. Food in place, put the lid on, and place ten to twelve bricks evenly around the lid. This will produce a medium-hot cooking temperature in the oven. If your cooking time is more than 20 or 30 minutes, you need some started briquettes in reserve. A good time to start them would be when you start your cooking.

The only way you can check the progress of the cooking is to take the lid off and look in. Here is where you discover that the handle on the lid is very hot. You need a "lid lifter", a hook-type device that hooks under the handle for lifting the lid. You can find them at camping equipment and Dutch oven cookery stores. Or if you know how they look, you can get a blacksmith friend to make one for you. If you don't have a lid lifter, you can use a stout pair of pliers. In any case, you need a pair of insulated gloves. You can find dandy ones at the welding supply store.

About every 20 minutes of your cooking time, you want to pick the whole oven up and rotate it about a half turn on the coals. This is to move the hot spots and get even cooking. When you take the lid off, if you are using bricks on top, give it a half turn when you replace it.

Now it's just a matter of waiting until the food is done. The time should be about the same as if you were cooking in a 350°F oven.

When you are baking things like bread or biscuits, you want most of the heat from the top. If you have started as above, remove about half the bricks from the bottom of the oven after about 15 minutes. A pair of long tongs works well for moving hot bricks.

Here is where you start learning from doing. If your bread comes out a little too brown on the bottom, you make a note to remove a few more bricks from the bottom next time. Taking notes really helps.

One last caution. When you cook anything that contains a lot of sugar, like a cake or cobbler, in or on cast iron, the sugar tends to bond with the iron and makes a big mess. A good way to avoid this is to line your oven or pan with aluminum foil and cook inside the foil. Sure saves a lot of cleanup. Most of the time, something like an upside-down cake will be served from the oven anyway, so looks won't count a whole lot.

When you are finished cooking, clean your iron as soon as you can. What works for me is to heat it fairly hot and then scrub it under running water with a stiff bristle brush. If there is something stuck, scrape it with a plastic scraper. You can use metal if you are careful not to scratch your seasoned surface. Heat the iron again until all the water has evaporated, give the iron a good coat of grease and put it away in a dry place. Instead of using the usual vegetable oil or shortening on your iron for preservation, you can use olive oil or medical grade mineral oil. The latter comes highly recommended by cast iron experts.

As for recipes, just about anything you cook can be cooked in a Dutch oven or cast iron pan. Once in a while, a chemical reaction between what you're cooking and the iron itself will take place, and turn everything black. Don't panic. It's not poison; it just doesn't look good. I've had it happen when just cooking beans in cast iron. The problem is caused by your pot losing its seasoning. If this happens to you, just clean your pot real good and re-season it.