How to Love Your Cast-Iron Skillet

When you need something to fry up plutonium 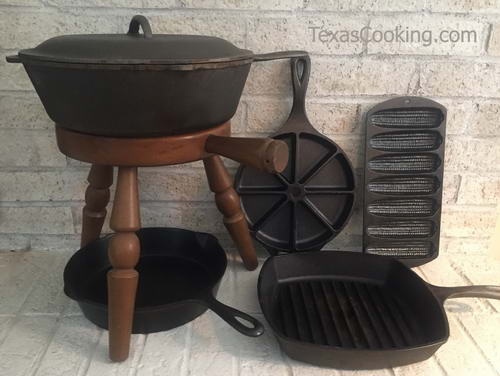 I'm a big fan of cast-iron cooking utensils. I recommend cast iron for everything from cornbread to fried chicken to pineapple upside-down cake. I just don't think you can beat it for even heat, durability and reasonable price. Oh, I have other skillets in my kitchen -- a shiny stainless steel that only gets used for omelettes, and even a non-stick type that I pull out for quick jobs. But if you took away my cast-iron skillet, I would have a hard time preparing many of my favorite dishes, at least to my satisfaction. And I would feel very deprived.

A good cast-iron skillet, properly cared for, can last for generations. I have two in my kitchen: a 10-incher that I rescued from a junk shop about ten years ago and use almost daily, and a 12-inch heavy-duty monster that, with its lid, weighs a whopping 15 pounds, in which I fry chicken, smother steak and produce all manner of main dishes.

Once during a conversation with a friend, also an avid cook, I mentioned my preference for cast-iron. My friend said she just never got the hang of cast-iron cooking -- said she'd tried it, and not only had everything stuck to the pan and burned, but she had a devil of a time getting it clean afterwards. My friend, you see, had never heard of the seasoning process that is essential for cast-iron cookware. And to make a bad situation worse, she was attempting to clean it by scrubbing with cleanser.

Cast iron has a porous surface. The seasoning process serves to fill and smooth the surface of the pan. It's true that the more you use and season a cast-iron skillet, the more non-stick the surface becomes. Below I explain how to season a new or used cast-iron utensil.

To eliminate any concerns about using too much shortening, you can put the pan in the oven upside down. Put a cookie sheet or aluminum foil on the rack below to catch any drips.

A skillet or other utensil can be seasoned as often as necessary to maintain a good surface. Let's say you've just made tortillas (or fresh corn tortillas) and, after all that heat, the surface of your skillet looks dry. Just season it again before you put it away.

Until the pan is very well seasoned, either by many uses or repeated seasonings, do not attempt to cook foods with a high acid content (tomatoes, for instance). The corrosive nature of high-acid foods will not react well to unseasoned cast-iron. Once a pan is well-seasoned, however, you can use it for just about anything. I do believe my mother could have fried plutonium in her big skillet.

Perhaps the most difficult thing for a particularly fastidious cook to do is refrain from using soap or detergent in the cleaning process. Seasoned cast-iron utensils may be cleaned very nicely with boiling water and a stiff-bristled brush. (I have a short-handled brush with stiff nylon bristles that I use only for cleaning my cast-iron skillets.) And often, say after making cornbread, I merely brush the skillet vigorously, wipe it with a damp sponge, and dry it with a paper towel. It is important to dry cast-iron utensils well after use; they will rust unless thoroughly dried. Cast-iron utensils will darken with use, turning from a steely gray, when new, to dark gray or black.

Over years of use, my cast-iron skillets have become old friends. Although I would never choose to replace them, if I had to (let's say an astute kitchen thief broke in and recognized my skillets for the treasures they are), I could buy new skillets, season them well, and have some new old friends.