Nothing goes in a broiler. 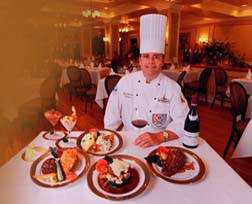 "I got my degree in business administration from Texas A&M and I was 18 hours into the masters program when I realized that it wasn't for me," says the chef/owner of Bohanan's Prime Steaks & Seafood in San Antonio.

"I got hired by Luby's right here in downtown San Antonio. About 30 days into their training program I had to leave to run the family business when my dad had back surgery. By the time I came back they weren't hiring anymore. But they put in a good word for me at Furr's in Lubbock. I went to work for them in April of 1985."

Bohanan eventually left Furr's to join Morrison's. "I was on the side of the business that does hospital catering," Bohanan explains. "I was working in Galveston at St. Mary's Hospital. That's also the site of the University of Texas Medical Branch, where doctors and nurses are trained. They kept talking to me about the club. They kept calling it the club, saying I should come to work at the club. That's all they called it, the club."

The club turned out to be the Galveston Artillery Club. Formed in 1840 to protect the Galveston Harbor, it is the oldest private club in the United States. Bohanan agreed to consult after hours but kept his day job. "They finally made me an offer I couldn't refuse. The hospital looked like it was about to close so I left in 1994." Bohanan's position at the Artillery Club was as general manager and executive chef.

"There's a huge difference going from cooking for 400 to cooking for 40," Bohanan says. "I didn't really do much cooking at the hospital, I was too busy managing.

"I was told I had an opportunity at the Artillery Club. Then I found out who the members were. There were five or six billionaires and probably 100 millionaires. Had I known who I was going to work for, I won't lie, I would have been pretty nervous. These were captains of industry from all over Texas and the U.S. There were people who owned banks and insurance companies."

From Dream to Reality

Bohanan told his new employers that his long-term goal was to open his own restaurant in 6 to 8 years. True to his word, he left the Artillery Club 8 1/2 years later to open Bohanan's.

The decision was a good one. Since opening in 2002, Bohanan's has been ranked one of the top 5 steakhouses in Texas. The restaurant is one of only six in San Antonio to receive the AAA Four Diamond Award. It has also been recognized with the Wine Spectator Award of Excellence and the San Antonio Concierge Society has named it one of the top 5 restaurants in the city.

"That's kind of amazing for a restaurant that's only been open a couple of years," Bohanan admits. "Our rule of thumb here is to buy the best product you can get within reason. Our blue fin tuna is flown in fresh from Hawaii. We use only center-cut prime grade beef. You can ask any of the restaurant suppliers in San Antonio, I have the tightest specs in town.

"We were chosen by the Heartbrand Cattle Company to launch their product, Akaushi beef, in the United States. We're the only restaurant in the country serving it. It grades out at three grades above prime. You can get it here and on the Internet. That's it. No other restaurant in America is serving the beef we serve."

Located at 219 E. Houston, Bohanan's is at the heart of San Antonio's trendy downtown district centered around the historic Majestic Theater. "I chose the downtown location for a couple of reasons," Bohanan says. "First, I didn't have the money to open a place from scratch. I needed to find an existing location.

Secondly, I'd known Houston Street all my life. Whenever my mother and grandmother would start talking about shopping, my dad and my grandfather would disappear. Mom and grandma weren't about to let babysitting stop them from going shopping, so they brought me with them."

Bohanan says sixty percent of his $3 million in food sales is beef, lamb, deer and pork. The other forty percent is seafood. He says the restaurant also does a large wine volume.

"We have three certified sommeliers working here. We really take our wine seriously. The first sommelier I hired ended up being named the best young sommelier in the country. As soon as he won, the French Laundry (in California's Napa Valley, considered by many to be the best restaurant in America) hired him away. Now he's working in New York.

"Our sommelier now, Laz McGill, is also very good. He makes sure our staff knows how to pair wine with food and he's always ready to help a guest choose the right wine to go with their meal.

"We don't have the largest wine list. We're not trying to be pretentious about it. You might sell some Rothschild occasionally but only on special occasions. That's not what we're trying to do. We want to provide the right wine, not the best known or the most expensive."

Bohanan not only takes his food and wine seriously, he's also serious about his responsibility as a business owner. "I have 48 employees who trust me and believe in me. They've got wives and children that are someday going to need to go to college. That's a lot of responsibility and I take it very seriously. I know I've left jobs because I didn't believe in what the boss was doing. We never opened this restaurant to be the biggest. We opened it to be the best. That's my vision."

And Bohanan holds to that vision. "If you get something here that's not perfect, it's because of the human factor. It's because we messed it up. It's not because we're buying some substandard food and paying someone an enormous amount of money to make some frilly sauce that you can't pronounce to go over it so you don't really know what you're eating.

"Our food is very basic, very simple and very perfect. Every steak is grilled over hardwood mesquite. Nothing goes in a broiler. That takes talent. If you want some frilly sauce, we'll be happy to make it and then put it on the side. But we do not come out of the kitchen with it already done that way because at that point you might as well have bought the cheaper stuff because nobody's going to be able to tell.

"I'm not some spendthrift or rich kid, but I'm not going to try to save money at the cost of quality. You're only as good as your reputation in this business and you're really only as good as your last meal. If somebody comes here and says, 'You know, that was okay, but it wasn't as good as last time,' have I really saved any money? I don't think so." 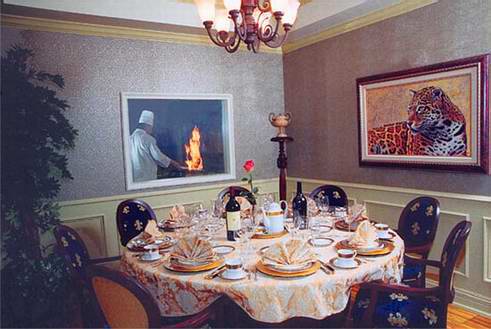 Roll a thin amount of puff pastry in regular sugar, par bake in the oven 5-8 min. Spread over the top the apple sauce, and arrange the sliced apples in a circle. Sprinkle some sugar and a small amount of diced butter on the top. Bake in the 350F pre-heated oven until golden brown 15-20 min.

To Make the Cinnamon Ice Cream

Break the cinnamon sticks in pieces. Make a caramel with the 3 oz sugar till golden brown and add the cinnamon sticks, then poor the milk and the cream in the pot and bring to a boil. Strain with a sifter and back on the stove. Mix the egg yolks and the sugar to a pale color, temper with the hot milk and cook till it coats a wooden spatula or 180F. Strain and let cool in ice-bath. Freeze in an ice cream machine according to manufacturer's directions.

To Make the Apple sauce In a sauce pan mix together diced apple ,ground cinnamon ,sugar , and water, bring to a boil and reduce the heat cook until the apple are soft. Let cool and puree the mixture, add the butter keep swirling pan puree until the butter is dissolve, keep in refrigerator.

Put the onions in a bowl and cover with ice cold water and sprinkle the seasoned salt over, set in the refrigerator for at least 20 min. (you can do this the night before) drain briefly and toss in flour. Shake off excess and fry till golden browned (they will come very crunchy) salt and pepper these as soon as they come out of the oil.

Salt and pepper the filets, dusting them in flour shaking off excess. Heat olive oil in a large saut pan till hot, add filets and saut for approx 3 min till lightly browned. Add a few pieces of butter and cook till butter starts to brown a bit. Turn filets over and cook for two min more till done. Remove to a platter and keep warm. Add garlic and shallot and sweat for 20 seconds, deglaze pan with lemon juice and white wine , scraping up the browned bits stuck to the pan.

Add fume and reduce to about half. Add the butter in pieces and stir all the while till the butter is incorporated in to the sauce. (It should start to thicken and look creamy). Remove from heat (if it gets too hot the sauce will break) finish with the chopped parsley and pour over the filets and top with crispy fried onions.