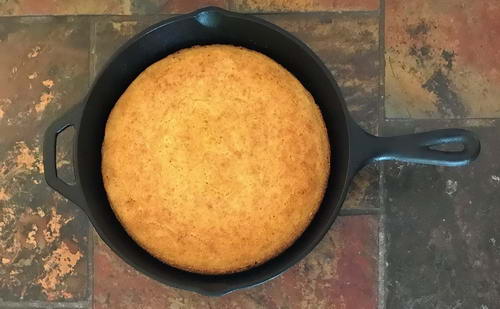 An easy way to stir up a debate is to start a discussion on how to make a pan of cornbread.

The debate can cover several important issues. What color cornmeal? Should it be stone-ground? Is the cornbread thick or thin? Baked in an iron skillet?

The type of corn determines whether the meal will be white or yellow, or blue if you live in an area where blue corn is available. White and yellow may be used interchangeably in most cornbread recipes. I've never used blue cornmeal, but reference books indicate it can be crumbly and difficult to work with.

Corn is ground into meal by one of two methods. Water-ground is ground on a mill turned by water power and may also be referred to as stone-ground. The meal retains more of the germ of the corn. While more nutritious, it also has a shorter shelf life. Plain cornmeal is ground with huge milling machines that remove most of the husk and germ. Many people prefer stone-ground for cornbread because of its coarser texture.

Recipes for cornbread vary, but most contain a blend of meal, eggs, liquid and fat. The batter is mixed in one bowl and then baked. The baking method can start another argument. As a Texas girl, I always thought cornbread in the South was baked in an iron skillet and was supposed to be thick, not thin. I still believe that, although I was surprised to see a sentence recently in a book stating that southern cornbread was thin and New England cornbread was thick. What? Not having been to Vermont to eat cornbread, I can't really comment, but my family (North Carolina, Tennessee, Texas) makes big, thick cornbread. And yes, we cook it in a sizzling hot iron skillet. If the skillet isn't hot enough, the bread won't be brown and crisp on the bottom.

Although heating the oven is required, summer is a great time of year to have cornbread. It's the perfect accompaniment for black-eyed peas, homegrown tomatoes, okra and thick slices of cold ham. If two iron skillets are available, even better. Bake two batches of cornbread at once and save one for cornbread salad. The weather is hot, the salad is cold, and it can be a meal on its own.

The origin of cornbread salad is unclear. Cornbread and sweet or buttermilk used to be served in some households for the family's supper. Perhaps the cook decided to enrich the bread with what was in the garden - tomatoes, onions and green peppers. Old family recipes differ slightly, of course, but the use of salad dressing versus mayonnaise is the main point of contention. It depends on whether you grew up with the real stuff or your mama always bought Miracle Whip. I've tried both and it's strictly a matter of personal taste. Either will moisten the salad.

Back to the cornbread arguments. Some recipes for cornbread salad have special directions for the cornbread. Don't use sugar -- do use sugar. Use brown sugar instead of white. Don't cook the bread real brown. Or cook it brown and trim all the brown edges off. The easiest way to solve this dilemma is to make cornbread as usual and then crumble it for the salad.

The following has been my cornbread recipe for at least 30 years. I use an iron skillet, always. In fact, I have two iron skillets reserved for nothing except baking cornbread. If you can't abide browned cornbread in your cornbread salad, then bake it in a greased Pyrex baking dish.