Up until recently, you needed a special occasion like a family reunion to justify the trouble it took to produce the gallon or more of ice cream that your traditional hand-cranked or electric ice cream freezer churned out, however delicious it was. 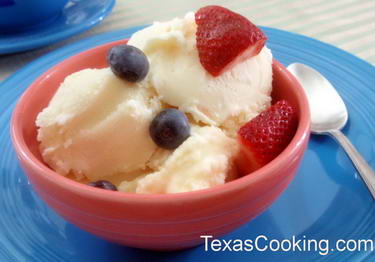 The new, low-cost countertop ice cream makers have changed all that. No more bags of ice to fool with. No more worrying about the proportion of rock salt to ice. And, come to think of it, no more gallon or more of ice cream when all you wanted was enough to serve four people.

Not that traditional ice cream freezers don't have their place - or their time. Their time is almost always during the summer months, and they fill their place wonderfully at family reunions, neighborhood get-togethers and other gatherings where there are plenty of mouths eager for homemade ice cream.

This article is not a product review of all or even several of the various countertop ice cream makers on the market. Rather, my purpose is to assure those cooks who have not already tried them that they can expect these new units to do a fine job.

The principle used by these machines is quite simple. The actual freezing is accomplished in the unit's freezer bowl, which contains a cooling liquid between a double-insulated wall. The bowl must be extremely cold before it can freeze anything, so you put the bowl in your freezer, preferably for at least 12 hours. (My original unit came with an extra freezer bowl, so I keep both bowls in the freezer at all times so I can make ice cream whenever the notion strikes me.)

You put the bowl in the ice cream maker, set the little plastic mixing arm into place, pour the ice cream mix in the bowl, and turn on the unit for 20 to 30 minutes. That's about all there is to it. The top of the unit is open to allow for the addition of goodies like nuts and chocolate chips without interrupting the freezing cycle. The only thing that the unit's small motor does is turn the bowl so that the cream mixture is churned during the freezing process. The churning incorporates air into the mixture and ensures a creamy result.

At the end of the freezing cycle (25 to 30 minutes, depending upon the quantity of the recipe), the ice cream will be frozen, but not as firm as you would like. You transfer the ice cream to an airtight container and put it in your refrigerator's freezer compartment for two to three hours.

The unit I have used most is the single-bowl Model CIM-20 Cuisinart, which is pictured on this page. It makes up to one and one-half quarts of ice cream, sorbet or frozen yogurt, and I recommend it. It is not terribly noisy, but remember that it will be on continuously for up to a half hour, so if noise bothers you, take it in a room where you can shut the door and let it do its thing without getting on your nerves. If you planned on listening to music or watching television while it runs, I'd definitely put it in a different room.

These countertop units are very affordable (both well under $100) and produce excellent ice cream and a variety of other frozen desserts. By the way, the difference in these units and the Italian gelato makers costing $600-$700 is the mechanism involved. These more expensive makers do not require pre-frozen freezer bowls, but contain little compressors that actually chill and eventually freeze the ice cream - a much more complex piece of equipment.

Another thing to keep in mind is the quality of your ingredients. Use the ripest fruit, fine chocolate, good Dutch process cocoa, quality extracts (never artificial flavorings) and, of course, the freshest eggs, milk and cream.

If you leaf through an ice cream recipe collection, you will notice that there are many different ways to make ice cream, i.e., cooked mixtures and uncooked mixtures, recipes with and without eggs, recipes calling for whole milk, half-and-half or heavy cream, or combinations. Even though most of the fun in this whole experience is in the eating, a lot of the fun - for the cook, anyway -- is in experimenting with recipes. Once I found my favorite vanilla ice cream, for instance, it became my base recipe for most of the fresh fruit ice creams I make like peach, raspberry and strawberry.

These recipes are favorites of mine. Personally, I prefer the richness and smoothness of custards - that is, cooked mixtures that contain egg yolks, but I have included rich and delicious ice creams that do not contain eggs. Each of these recipes makes about 1 quart.

Combine the egg yolks, sugar, salt and vanilla in a bowl, and whisk until smooth. Set aside.

In a large, heavy saucepan, warm the milk and cream over medium heat until tiny bubbles form around the edges of the pan, about 5 minutes. Do not boil.

Cook over medium heat, stirring constantly with a wooden spoon until custard thickens, about 10 minutes. Custard is thickened enough when a finger drawn across the back of the spoon leaves a trail. Do not let the custard boil.

Remove from heat and pour mixture through a fine-mesh sieve set over a large bowl. Since the mixture must be cold before it can be frozen, it will hasten cooling if the large bowl is nested in a larger bowl filled with ice cubes and water. Cool to room temperature, then refrigerate until chilled, at least one hour. Put plastic wrap on the surface of the mixture to prevent a skin from forming.

Pour the chilled mixture into the ice cream maker and freeze according to manufacturer's instructions (25 minutes in the single-bowl Cuisinart). Transfer ice cream to a chilled, airtight container and freeze until firm, at least 3 hours.

You will need two cups of ripe, fresh strawberries. Place 1-½ cups of the strawberries in a blender and purée until smooth. Chop the remaining half cup of strawberries and refrigerate.

Make the Vanilla Ice Cream recipe, above, warming the puréed strawberries with the milk and cream. When ice cream is almost frozen, add the remaining one-half cup of chopped strawberries while the ice cream maker is running, and churn until just blended. Transfer ice cream to a chilled, airtight container and freeze until firm, at least 3 hours.

Again, you will need two cups of ripe, fresh chopped peaches. Purée 1 cup of the peaches in a blender until smooth. Chop the remaining 1 cup, stir in 2 teaspoons fresh lemon juice, and refrigerate.

Using the Vanilla Ice Cream recipe, warm the puréed peaches with the milk and cream. When the ice cream is almost frozen, add the remaining cup of chopped peaches while the ice cream maker is running, and churn until blended. Transfer ice cream to a chilled, airtight container and freeze until firm, at least 3 hours.

Place all ingredients except almonds in a mixing bowl and combine until well blended. Pour into freezer bowl of the ice cream maker and process for 25 minutes. When ice cream is almost frozen, add the cup slivered, toasted almonds while machine is running, and churn until just mixed in.

Transfer ice cream to a chilled, airtight container and freeze until firm, at least 3 hours.

You'll love Mexican Ibarra chocolate with its hint of cinnamon. It is available at many supermarkets and online from Amazon.

Combine all ingredients in a heavy saucepan. Gently heat the mixture until chocolate and sugar dissolve. Remove from heat and pour mixture through a fine-mesh sieve set over a bowl nested in a bowl filled with ice cubes and water. When room temperature, cover and chill in the refrigerator until ready to freeze.

Blend for a few seconds before pouring into the ice cream maker. Follow manufacturer's instructions for freezing.

There is no question in my mind that the ice cream I make at home is better than anything I can buy at the supermarket - better even than the premium ice creams. My husband has been hopelessly addicted to Hagen Daaz Dulce de Leche for the last few years, which is an excellent ice cream, especially if you are a caramel lover.

I made the Williams-Sonoma recipe for Dulce de Leche, and he was instantly converted. I will close this article with that recipe. The dulce de leche called for in the recipe is available at Williams-Sonoma stores and online at www.williamssonoma.com.

Texas Cooking has no affiliation with Williams-Sonoma. I just think very highly of this recipe, and I'm a firm believer in sharing the good things.

In a saucepan over medium heat, warm the cream, milk and 2/3 cup of the dulce de leche, stirring constantly, until the mixture is blended and steam begins to rise from the surface, 4 to 5 minutes.

In a heatproof mixing bowl, whisk together the egg yolks, sugar and salt until blended. Gradually add the hot cream mixture, whisking constantly until fully incorporated. Transfer the mixture to a clean saucepan and set over medium-low heat. Cook, stirring slowly and continuously with a wooden spoon or spatula, until the custard thickens and a finger drawn across the back of the spoon leaves a path, 8 to 10 minutes; do not allow the custard to boil.

Pour the custard through a fine-mesh sieve set over a clean bowl. Nestle the bowl in a larger one filled halfway with ice and water and cool the custard to room temperature, stirring occasionally. Refrigerate until chilled, at least 1 hour.

Transfer the custard to an ice cream maker and freeze according to the manufacturer's instructions. At the end of the freezing stage, dribble the remaining 1/3 cup dulce de leche into the churning ice cream until it is just swirled throughout.

Transfer the ice cream to a chilled container, cover and freeze until firm, 3 to 4 hours. Makes about 1 quart.

Shop for special deals on ice cream machines from Amazon.