Shrimp is touted as America's favorite shellfish and it may well be since it is the most valuable commercial crustacean harvested from the waters of the Texas Gulf. While many varieties are found around the world, only brown, white and pink shrimp are taken from the Gulf.

Used for both food and bait, most shrimp are captured by boats towing a trawl. The state of Texas issues three separate commercial shrimp licenses (for Gulf, bay, and bait shrimp) and one specialty license for recreational shrimpers. 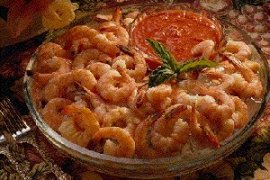 Unless you are lucky enough to live next-door to a shrimper or within shouting distance of the docks, you can be certain that any shrimp purchased from a grocery or fishmonger has been frozen. The reason is simple. Fresh shrimp are highly perishable and freeze perfectly, better than most other shellfish. Usually thawed for retail sale, the defrosted shrimp are displayed on ice. While it should be marked 'previously frozen,' it seldom is, and only savvy shoppers are aware that it has been in the freezer.

It's best to purchase shrimp on the day it's to be served, and avoid any efforts at re-freezing. Have the shrimp wrapped with ice at the market and keep it on ice until cooking time.

Shrimp are graded by how many are in a pound and priced accordingly. The grades range from colossal (10 or less per pound) to miniature (about 100). If you buy jumbo shrimp, there will be 11 to 15 shrimp in a pound and extra-large will yield 16 to 20. The larger shrimp are the most expensive, but you should be guided by who's doing the peeling. Since the biggest are easier to peel, splurge on jumbo or extra-large if cooked, peeled shrimp are required for a recipe. If a boiled shrimp and beer party for your friends is in the works, however, large shrimp are perfectly adequate and will keep your guests entertained.

No matter what size shrimp are selected, figure on a minimum of one-half pound per person if shrimp is the main course. And although most cookbooks will advise that one pound should provide enough for four appetizer size servings, don't bet on it. Allow a bit more if the guests are big shrimp fans.

Shrimp may be prepared with the shells on, or shelled and deveined before cooking. The sand vein of jumbo or extra-large shrimp is dark and may contain grit. It can be removed with a special tool or the point of a sharp knife. In smaller shrimp, it's a matter of personal preference, and usually not worth the trouble. If the vein isn't dark, it's clean anyway.

Shrimp are easy to cook by any number of preparation methods. There's only one rule: don't overcook. Shrimp are done when they turn pink and can be tough if cooked too long. For best results, cook the minimum amount of time specified in a recipe and watch closely.

The quickest, easiest way to prepare shrimp is to boil it. Unpeeled shrimp will take about three minutes of cooking time and peeled shrimp will be done in one to two minutes. To stop the cooking process, drain the shrimp as soon as it turns pink and rinse in cold water. Plain water can be used for the boiling liquid, but substituting part of the water with beer, wine or ale will impart a different flavor. Adding a seafood seasoning like Old Bay, or including crab boil mix in the water will also change the taste.

Shrimp complements other ingredients and adapts well to both spicy and plain recipes. While no robust gumbo would be complete without shrimp, an otherwise plain dish of pasta and sauce becomes elegant fare when shrimp is added. Perhaps the most versatile shellfish on the market, it is enjoyed by nearly everyone no matter how it's prepared.

Bring the water to a boil in a large saucepan. Stir in the salt. Add the shrimp and allow the water to return to a boil. Reduce the heat to low and cover the pan. Cook until the shrimp are pink, about 3 minutes. Drain well and rinse in cold water. Peel, devein and serve as desired.

Preheat the broiler. Spray a metal baking pan with non-stick spray. Use a pan big enough to spread the shrimp in a single layer. Drizzle the olive oil over the shrimp. Heavily pepper the shrimp. (Since the shrimp is being seasoned through the shells, use plenty of everything.) Add salt, Tabasco, Worcestershire sauce and the juice of the lemons. Cut the butter into small chunks and scatter over the shrimp.

Broil about 10 minutes, depending on the size of the shrimp. When the shrimp is pink, it is done. Cool slightly and divide the shrimp and sauce into two portions. A pasta bowl works nicely. Serve immediately with French bread and cold beer and let each person peel his own. The recipe may be doubled.