The Black-eyed Bird of Happiness 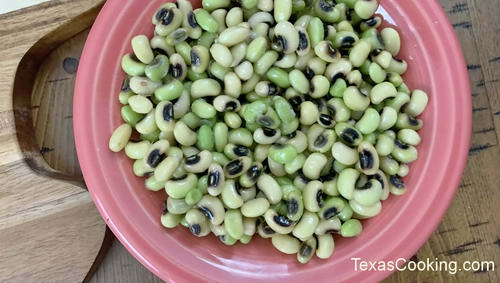 [This column is dedicated to Harry Marlin in Brownwood, Texas. Harry knows more about black-eyed peas than anyone. He was and is my teacher.]

In Texas, all God fearing Texans eat black-eyed peas on New Year's Day. The black-eyes, as most of us call them, are supposed to bring good luck in the new year. The peas got their good luck status during the Civil War when the Yankees would strip the countryside of everything edible. They left the peas and corn thinking they were only good for animal fodder. The financial good luck comes when you have collards, mustard greens or cabbage with your black-eyes. Green, of course, represents the color of money.

Black-eyed peas originated in Africa. They found their way to the West Indies, where it was only a short hop over to the Southern United States. There they found cult status.

Black-eyes come three ways: fresh, still in the shell, dried, and canned. The fresh peas are out of season in winter. I suppose you could find some, but they would be imported from some place like Bogata, Columbia or such.

The dried peas are cooked like any other legume. Soak them overnight, then cook them slowly with some seasoning such as bacon, salt pork, ham hock, plain ham or my favorite, Orrington Farms ham base.

The canned peas are mostly just warmed up. You can get them pre- seasoned with bacon and other stuff. I advise again the ones seasoned with jalapeño.

If you do come up with a mess of fresh black-eyes, they require some manual labor to prepare them for the table. They come with the shell on like fresh green beans. Only thing is, the pea shells are tough. You have to remove them to get at the delicious little orb inside. Some of the shells that are immature and tender can be cooked into the mess. These are called snaps, because you snap them into short pieces. Only an experienced pea sheller can educate you on what you can use. (I do not qualify as an experienced pea sheller; I use dried peas for new years.)

Put one pound of dry peas in a large pot. (You can sort the peas looking for stems and seeds if you like, but now days most come free of debris). Cover the peas with several inches of water and let stand overnight.

When you put them on to cook start with a medium hot fire. When the peas begin to boil cut the heat back to a good simmer. Give them a stir once in a while. If foam begins to form on top, skim it off with a large, metal spoon.

When the peas have come to a steady simmer, add one heaping teaspoon of Orrington Farms ham base. Let the simmer continue until the peas are tender. Usually about an hour to an hour and a half. If you don't know how to tell when peas are done, you need to be eating at McDonalds. When the peas are done, check them for salt. The ham base is very salty, so you probably won't need any additional salt. You can sprinkle in a bit of black pepper if you like. This will make enough to satisfy the appetites of the "normal" family.

Combine the above and store covered in the refrigerator overnight; keeps well.

Put the rice on to cook according to package directions. Sauté the onion and peppers in about two tablespoons of bacon grease or butter or shortening.

Add the can of black-eyed peas with about half the juice drained off. Heat through to a good simmer.

Very good with cornbread or corn tortillas. Serves two good appetites, and is a great dish for those cold winter evenings.

All the above recipes just beg for cornbread. I recently found my Best Cornbread recipe, so I'll share it with you.

First, heat the shortening or oil in the skillet you are going to use to bake the cornbread in while you mix the other ingredients.

Mix the dry ingredients in a large bowl. Add the water, milk and egg and mix well. Add the hot oil or shortening from the skillet, and mix in well.

Bake in a greased iron skillet or baking pan for about 25 minutes at 450°F. Serve hot.

There we go, boys and girls. The perfect accompaniment for your baked ham and sweet potatoes New Year's Day. If you throw in a mess of greens, next year will be a happy and prosperous year for you.