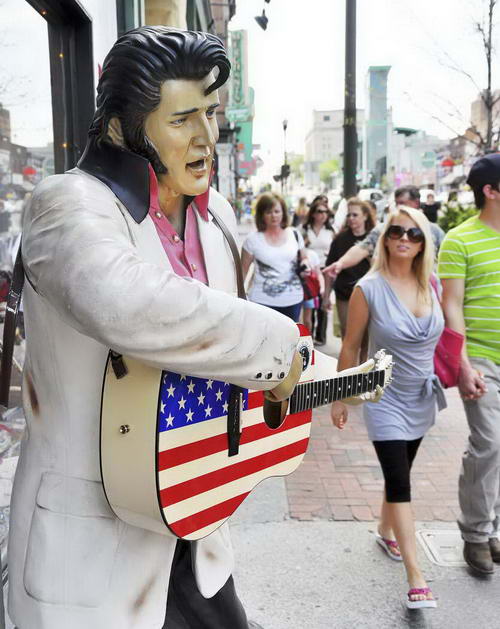 Let's now pay homage to Southern cooking, which is also referred to as down-home or comfort food. This often means well-cooked meat, fried foods, and rich desserts. The King of Rock 'n' Roll grew up eating Southern food and loved nothing better. In honor of Elvis' birthday on January 8, I will focus on a few of his favorite dishes.

No, Elvis wasn't born in Texas, but in Tupelo, Mississippi. He became familiar with the performing venues in many Texas cities, though, at the beginning of his career. In 1955, Billboard magazine reported that "West Texas is his hottest territory to date. . ." Elvis played Dallas, San Antonio and Houston, plus smaller towns – Lubbock, Midland, Tyler, Waco, Galveston, Gilmer and others.

When Presley pandemonium really hit in 1956, a show in Dallas made headlines. Hysterical fans – 26,500 of them – packed the Cotton Bowl on October 11. The Dallas Morning News reported that the football stadium hadn't witnessed such excitement "since a December day in 1949 when a crazy-legged [SMU] Mustang named Kyle Rote tied the score against the heavily favored Fighting Irish of Notre Dame."

Elvis hadn't seen the last of Texas. To the dismay of adoring fans, he received his draft induction notice in December 1957, and was assigned to the Second Armored Division at Fort Hood in Central Texas for his basic training. His parents joined him in Killeen (the town outside the base) when he completed basic training. They rented a house there, and it was quite a relief for Elvis to have loved ones, friends and fans close by. In September 1958, Pfc Presley and his unit left for Germany, and the rest is history.

Fix all three of these recipes, invite friends over, watch some Elvis movies on DVD, and enjoy an Elvis-style feast.

This is probably the best-known Elvis snack. If you are making more than one, increase the ingredients (except for the oil) in proportion to the number of sandwiches you need.

Spread one side of both bread slices with peanut butter. Cover one slice with the banana slices.

Heat the vegetable oil in a heavy-bottomed frying pan over medium-high heat. Add the bacon slices and cook for 3 to 5 minutes until very crisp, turning once. Remove to a paper towel to drain and pour off all but one tablespoon of the bacon drippings from the pan. Layer the crisp bacon over the banana slices and top with the second bread slice (peanut butter side down), pressing lightly to seal.

Butter the outside of each bread slice and carefully place in the frying pan. Fry for about 2 minutes, or until the bottom is crisp and brown. Turn over and fry for approximately 2 more minutes, until the bananas and peanut butter are just beginning to soften.

Remove to a cutting board and slice in half. Arrange lettuce leaves on serving plate and top with sliced sandwich. Serve hot with relishes, if desired.

Elvis loved pork. Reportedly, this was his favorite pizza.

Prepare pizza dough according to the instructions on the package and set aside. Or, use a ready-made pizza base. Pour the barbecue sauce into a small saucepan and heat gently over medium heat, stirring occasionally.

In a medium skillet or frying pan, heat the oil over medium-high heat. Add the pork tenderloin and cook for 3 to 4 minutes, or until golden, turning to brown evenly. Add about 1/2 cup of the barbecue sauce and cook the pork over medium-low heat, covered, for about 20 minutes. Baste occasionally. Remove from heat and reserve any pan juices.

Preheat the oven to 500°F. Place the prepared pizza base on a baking sheet, according to the directions. Spread about 1 cup of the barbecue sauce over the base to within 1/2-inch of the edge. Toss the cheeses together; reserve 1/2 cup. Sprinkle remaining cheese over the base and bake for about 10 minutes, until cheese is bubbling and crust is golden.

While cheese is melting, carve the tenderloin into slices, then shred the slices into thin strips. Remove pizza from the oven and sprinkle pork strips over the cheese. Pour over the remaining sauce and any remaining pan juices. Sprinkle reserved 1/2 cup cheese over top and return pizza to the oven for 5 minutes, until hot and bubbling. Divide into wedges and garnish with basil leaves, if desired. Serve immediately.

I don't know if Elvis ever tasted fried pineapple, but I'll bet he would have loved it. Enjoy this while watching Blue Hawaii!
With a sharp knife, cut off top half of pineapple, reserving it for another use. Remove rind from the bottom (sweeter) half and slice pineapple into 4 rounds, each 1/2-inch thick. Spread sugar on a plate and dredge the pineapple slices in the sugar.

In a large frying pan, melt butter over high heat until foaming. Add the dredged pineapple slices and fry for 2 minutes. Flip the slices and spread raisins around them (in the pan). Fry for another 2 to 3 minutes until pineapple has browned and raisins have plumped.

Remove from heat and transfer one pineapple slice to each of 4 dessert plates, flipping them so the more attractively browned side faces upward. Spoon some of the raisins onto each plate and top with a bit of the sauce from the frying pan. Garnish with the chocolate shavings and – if desired – the mint sprigs. Serve immediately.