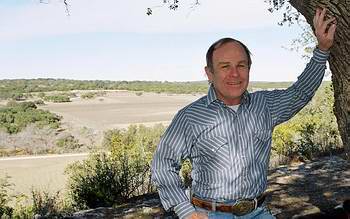 Gary Elliott of Driftwood Vineyards is reluctant to enter his wines in too many competitions. He's worried that he might win.

"I didn't enter any for a couple of years because winning is such an expensive proposition. If you win the competition you're expected to donate a couple of cases of wine for the sponsor to auction off. Then you have to present them with this huge engraved bottle of the winning wine. That bottle holds a couple more cases. That's auctioned off too. I've known competitions where that big bottle raises as much as $20,000. All of the proceeds go to charity. That can get pretty expensive for a small winery like this."

Elliott treats the cost of winning as an advertising expense. "If it increases my name recognition and gets us more sales then it's worth it. It's a price you have to be willing to pay if you win."

Driftwood Vineyards, in the heart of the Hill Country between Dripping Springs and Wimberley, can't afford to win too many contests. Still, Elliott couldn't resist entering his 2005 Viognier in a wine competition earlier this year in Houston. Just his luck, it won. Not bad for a winery in only its third year of production.

Elliott and his wife, Kathy, planted grapes in 1998 when they couldn't make their 880 acre spread pay off with cattle, hay or horses. Since then the vineyard has grown to 14 acres with chardonnay, viognier, cabernet sauvignon, sangiovese, syrah, pinot noir and chenin blanc vines. The Elliotts sold their entire crop for the first couple of years before getting in to the wine making business.

"We keep about half the crop now," Elliott says. The vineyard produced an enormous crop of 80 tons in 2004 enabling the winery to produce 11 different wines.

Elliott isn't new to the grape growing business. His family has been at it in California since the 50's. His sister has been selling the family's grapes to the Beringer Winery in the Napa valley for years and recently opened her own winery in Paso Robles, Calif.

"We started making wine here in 2002," says Elliott. "We had five different kinds that year and just about all of them won some kind of award. We weren't able to produce much in 2003 because we lost a lot of the crop to a freeze. And our 2004 wine hasn't gotten into competition yet."

Elliott admits he didn't understand what he was getting into when he decided to start making wine. "I figured I could make more money off the wine than just the grapes. I didn't realize how expensive it was to open a winery. I'd made some wine at home in the past but never commercially. The only real difference in going commercial is moving up from a five gallon jug to a 2,000 gallon stainless steel tank."

He hadn't counted on all the administration that goes along with turning a hobby into a business. "I spend all day in the vineyard and the winery and then I spend every night doing paperwork. I've probably been working about 80 hours a week since we started making wine. I can't do that for too much longer. Something's going to have to change."

Elliott is hoping the business will start paying for itself in the next couple of years. "It's kind of a 'chicken and egg' situation," he says. "We need money to grow but we can't make the money until we increase production.

"I need to get up to about 6,000 cases. The problem is, I don't have the facilities to produce that much. I can't expand until I've got a couple of hundred thousand dollars for equipment and another couple hundred thousand for a building but right now I can't produce enough wine to raise that kind of money.

"Right now we don't generate enough revenue to cover the overhead. I can't afford to hire a bunch of people so I'm running around emptying trash cans and wrapping pipes before it freezes and doing all that kind of stuff that I should be paying someone else to do."

Elliott says his location is part of the problem. "If I was in California, in the Napa valley, and getting $100 a bottle for my wine, I'd be in good shape. But you can't do that in Texas. My 2005 Viognier is probably as good as a lot of $100 bottles of wine but I'm selling it for $30. The market decides what you can get. Out there in California you have the snob market where you can put a movie star's name on the label and get that kind of money."

The picture's not quite as bleak as Elliott paints it. Even though the winery currently produces only 2,000 cases per year, it has experienced a 100 percent growth rate over the last two years. "Growing too fast can be dangerous too," Elliott adds. "You can go bankrupt growing too fast. You just outrun your cashflow."

The winery and tasting room are perched on the highest point of the Driftwood property with a sweeping view of the vineyard and surrounding hills. "We probably get about 80 percent of our business from Houston." Elliott waves at the hilltop mansions in the distance. "You look at all these big houses on the tops of all the hills, they all belong to people who live in Houston. They like to have a retreat up here where they can get away. They come up for the weekend or on vacation."

Elliott describes his wines as Mediterranean. "Our whites are made in a Chablis style. We don't use a lot of oak. The viognier doesn't get any oak at all and the chardonnay just gets very light oak.

"Our reds are done in oak but in a light, fruit-forward style. They're not really heavy in tannins. You're not going to get that puckery sensation when you drink our wines. They're in a dry, Beaujolais style."

Just don't expect them to win a lot of high-priced awards.