Ninfa's Restaurant Goes Back to Basics

Back to Basics: Massive growth, then collapse and now rebirth returns original Ninfa's to its roots. 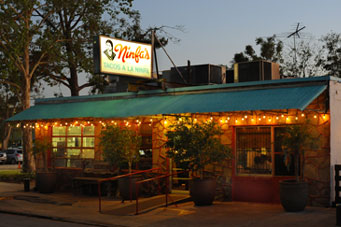 When Ninfa Lorenzo, better known as "Mama Ninfa," opened her tiny Mexican restaurant on Navigation Boulevard in Houston in 1973, she never dreamed it would grow to more than 70 locations and become one of Texas' best-known brands. She never intended it to be a "brand" at all. She was just trying to provide for her children.

When word got out that there was a great little Mexican restaurant in a quirky little building in the Houston barrio, people flocked to it. Ninfa's became a hit. It overflowed with customers. Eventually it grew -- almost uncontrollably. As more locations were added, the Lorenzo family was unable to keep up with every segment of the business. As often happens, managers at some of the restaurants not under Mama Ninfa's careful eye began to cut corners.

Fresh beef was replaced with frozen, salsa was poured from jars rather than prepared from scratch, tortillas were purchased instead of homemade, quality began to slip. Ninfa's went from a family-run Mexican food outpost to just another corporate chain. Customers stayed away in droves.

Niel Morgan has been in Houston a long time. He remembered when Ninfa's was the best Mexican restaurant in town. And he hated seeing what it had become.

So did the Lorenzo family. But the agreements they'd signed with the various franchisees around Texas didn't allow them to take control of the operations. They finally gave up and declared bankruptcy in 1996.

That's when Morgan financed the purchase of the Ninfa's chain by Serranos Restaurants. But he was only a minority partner. He didn't have the muscle to turn the business around without the cooperation of his partners. And they weren't interested. So in 2006 he bought them out and started Legacy Restaurants with his new partner, Chris Harter.

Harter's roots are out west. He owned four restaurants of his own in San Francisco and Scottsdale, Arizona before he joined a $700 million restaurant company. "I did it backwards," he explains. "I started out with my own businesses and then went to work for a huge corporation.". But Harter wasn't really comfortable as president of Levy Restaurants in Chicago. It was just too big. He couldn't have his hands on the operations the way he had when he'd had his own restaurants.

The opportunity to own and operate a smaller operation like the one Morgan was cranking up in Houston sounded much more interesting, so Harter headed south. "Our goal was to get it back to Mama Ninfa's original intention which was never sacrificing quality, putting your best foot forward," says Harter. "We were still very busy when we bought the restaurant but we decided we needed to change everything without changing anything.

"We really took it to an amazing level. Instead of using frozen ground beef, which is what we inherited, we're bringing fresh-ground chuck and grinding our own brisket."

Morgan, Harter and Chef Alex Padilla take that "freshness first" approach on every dish at the original Ninfa's. Ninfa's isn't a chain anymore. There are 29 locations now, but Legacy Restaurants only owns the one Mama Ninfa opened herself on Navigation Boulevard more than 37 years ago. The other locations are merely licensing the trademark.

Harter says the rebirth of the original Ninfa's starts with Padilla. "I found a chef who had done three restaurants in San Francisco and had worked at Boulevard in San Francisco for 15 years. I told him, 'You understand Mexican food; let's make this a quality restaurant.' And the results have been very good.

"Alex is a star. It takes a different type of chef to entirely retrain a staff, some of whom have been around in some cases for 35 years, and still keep the existing customer base and bring in new customers as well. He's a really great chef and just a real hands-on guy."

Legacy Restaurants also owns Antone's Poorboy Restaurants and is developing a new brand called Tabernera, a tavern-style Mexican restaurant. Three new Legacy restaurants will be opening soon in Scottsdale, Austin and the company's hometown, Houston. At least one of those locations will be the new concept for Ninfa's – Ninfa's Mexican Kitchen.

"There'll never be another original Ninfa's," says Harter. "We want to create our own new Ninfa's model. The new Ninfa's will probably be more modern and gleaming. You'll never duplicate that old quirky building on Navigation.

"We really feel like we have original Ninfa's set for the next decade, and we're going to keep introducing new items and keep it fresh and good and keep up the quality. That wasn't an easy task. We're now three years into that. Now we're looking at other locations. We're anticipating three new openings this year for Ninfa's Mexican Kitchen.

Our goal was to get it back to Mama Ninfa's original intention which was never sacrificing quality, putting your best foot forward

"We're looking at finding good, second generation space that we can convert for a lesser cost than a new space would cost. But we understand that comes with the baggage of being a location where a restaurant failed in the past. So you have to go in there with the right concept and a good PR angle from the start. And we've been able to find some tremendous opportunities. We've probably looked at 100 in the past three years and narrowed it down to the three we're going with."

Peel avocados and place them in a blender.

In a medium saucepan, boil tomatoes, tomatillos, garlic, and jalapenos for 15 minutes. Remove from saucepan and place all ingredients in blender with the avocados.

This healthy sauce would be excellent over our cheese enchiladas recipe in Grandma's Cookbook.