How to Make Frito Pie

Frito Pie: Yes, you have to use Fritos 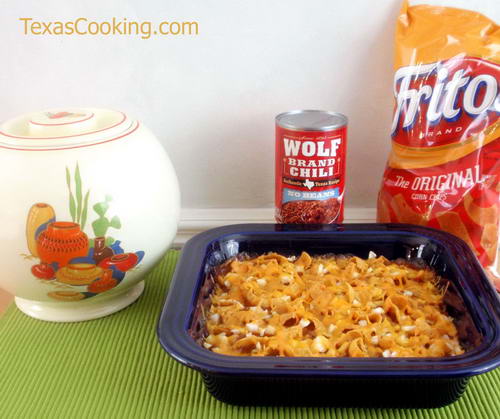 The rainy cold days of February leave me longing for Mexican food or at least something in that category. Usually the wanting hits about suppertime on an evening when I can't stand the thought of making enchiladas and cooking rice or, even more likely, when there's nothing in the kitchen that remotely resembles enchilada fixings. Frito Pie is an easy answer to the I-want-Mexican-dinner-dilemma. Not only is it quick and satisfying, but most of the ingredients are probably already in the pantry. (If you're reading this in some other part of the country, be aware that Velveeta cheese and Rotel tomatoes are staples in Texas.)

Frito corn chips have been around since the 1930's. Food historians indicate that they were first served in San Antonio in 1932 and were originally made of tortilla strips. A local candy maker named Doolin paid $100 for the original recipe, and although that was a decent sum of money in those days, he obviously got his money's worth. His company refined the recipe, mechanized the process and then moved the company to Dallas to sell the corn chips. The new company was named the Frito Co. and in l961 merged with the H. W. Lay Co. to form the snack king corporation called Frito-Lay, Inc.

Although there are many brands and types of chips, no one has been able to copy the distinctive taste, texture and crispness of Fritos. And when a recipe calls for Fritos, nothing else will do. Frito Pie is the big one, of course, and it simply isn't the same if any other chip is substituted.

There are many ways to make Frito Pie. The simplest recipes consist of just Fritos, chili and cheese layered in a baking dish. Others versions contain onions, jalapenos or green chilies. "Recipe" is probably too strong a word for these combinations since most of us just add ingredients to suit our taste, and then cover the whole thing with as much cheese as possible. In addition to week night dinners, there's no telling how many single-serving packages of Fritos have been ripped open, smothered in chili 'n cheese and sold at school fund-raising events or football games. Messy, yes, but it's a moneymaker that tastes great and satisfies hungry adults and picky little kids.

Frito Pie is also a great way to use leftover homemade chili. Canned chili can be used, but if a large pot of chili is cooked on a weekend, it may be turned into a middle of the week dinner without everyone whining about eating chili again. The recipes that follow are a bit different from the usual chili and cheese combinations and make a great meal on a cold night. And yes, you have to use Fritos.

Preheat the oven to 350F degrees. Spray a medium-size baking dish with non-stick spray. Combine the cheese and tomatoes in a saucepan (or see note below to use the microwave) and heat slowly until the cheese melts. Heat the chili in another saucepan.

Place half the Fritos in the baking dish. Spoon half the chili over the Fritos. Cover with a layer of cheese sauce. (There will be cheese sauce left over to use as a dip.) Scatter the remaining Fritos over the cheese. Cover with the rest of the chili and sprinkle with the shredded cheddar cheese. Bake uncovered about 30 minutes, until hot and bubbly.

Note: To microwave the cheese sauce, place the cubed cheese in a glass bowl. Pour the Rotel over the cheese. Cover with plastic wrap, leaving a small opening on one side as a vent. Microwave 3 minutes, stirring the mixture after each minute. Do not over-cook or allow the cheese to boil.

One of my favorite things to do with machaca is make enchiladas. Once you have the machaca, its really easy. I like a fairly hot sauce with this, so I make a nice sauce out of chipotle peppers, canned diced tomatoes, and beef broth. Its easy to make your own sauce, but if you are in a pinch for time you can also buy canned sauce from the store.

Preheat the oven to 350F degrees. Spray a 7 x 11-inch baking dish with non-stick spray. Heat the chili in a saucepan until it just comes to a boil. Remove from the heat. Crumble the Fritos and spread in the bottom of the baking dish. Lay the tamales on top of the Fritos. Cover with the hot chili.

Bake uncovered 20 minutes. Sprinkle with the shredded cheese and bake 5 to 10 minutes more, until the cheese melts and the mixture is bubbly.

Yields 2 servings. The recipe may be doubled.

Note: Canned tamales may be used if nothing else is available, although the results will be different. If frozen tamales in the shuck are used, thaw them before using.