Hudson's On The Bend Restaurant in Austin, Texas 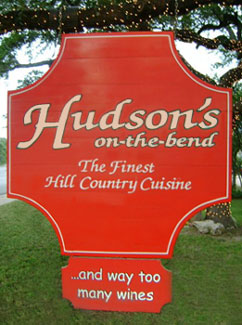 If the menu at Hudson's On The Bend in Austin seems overloaded with wild game, it's actually a function of its location. Owner Jeff Blank admits he couldn't get away with serving wild boar or venison loin in Miami or Manhattan.

"Texas is one place where I can do what I do," Blank laughs. "When I started the restaurant there were people doing regional food on the east and west coasts. So we started cooking what was in our own backyard, more venison, quail, duck, rattlesnake. We got some attention for that almost immediately so we started doing it more and more. It probably wouldn't work as well somewhere else."

Blank started serving his Hill Country cuisine when he opened the restaurant overlooking Lake Travis in 1984. After 25 years the operation has expanded to include not only one of Austin's best-loved restaurants, but a cooking school and a thriving online outlet for Blank's signature sauces and cookbooks. "It started out kind of tongue-in-cheek and people really love it. They like bringing their friends from out of town and ordering rattlesnake cakes."

Don't let Blank's playful attitude fool you. This isn't The Roadkill Grill. He's not frying up whatever happens to wander by. The most popular dish on the menu is the mixed grill featuring venison and rabbit tenders, pecan-smoked Bandera quail in a lime cilantro ginger glaze with Chuy's spicy game sausage and achiote-marinated buffalo.

Hot and crunchy rainbow trout is another time-honored favorite. Such a standard, in fact, it spawned another Hudson's outlet. Not on the bend, but on wheels. The Mighty Cone, a tricked-out fifth wheel trailer, on South Congress Street, grew out of the Austin City Limits Music Festival's desire to provide its guests with a portable taste of the city.

His Austin ventures aren't Blank's first rodeo. After graduating from the Hotel and Restaurant School at Oklahoma State University, he opened The Wineskin Restaurant in Aspen. "I had a European partner who'd been through classic chef's training. That was 35 years ago. That was the first time I tasted real stock. You couldn't even buy veal bones in Texas back then. That's where I learned to cook."

It's been a distinguished career for Blank, who has received the Conde Naste Traveler magazine Distinguished Restaurant Award and seen Hudson's named one of the magazine's Top 50 Restaurants in America. In 1994 Hudson's won an Award of Excellence from Wine Spectator magazine. And in April 2002 the Texas Wine and Food Festival named Blank a Who's Who in Texas Wine and Food.

All that notoriety would make it difficult for the Houston native to keep a lid on his recipes, so he doesn't try. He's written two books, "Cooking Fearlessly: Recipes And Other Adventures From Hudson's On The Bend" and "Fired Up! More Adventures and Recipes From Hudson's On The Bend." He gladly opens his bag of tricks once a month for a cooking class alongside Lake Travis where he goes step-by-step through recipes for Hudson's classics like Duck Diablos and Elk Wellington. Not only does Blank hand out tips and techniques, his cooking classes end with a four-course meal including wines from the restaurant's "Way-Too-Many" wine list.

While he doesn't have plans to open any more locations, Blank won't rule out the possibility. "You never know," he hedges. "I'm getting close to 60 now so I'm no spring chicken anymore. It doesn't feel like I've had Hudson's for 25 years. Would I do it all over again? Absolutely. Would I start over? I'm not so sure about that.

"I love the restaurant part of the business but instead of opening multiple locations, I wanted to evolve other revenue streams. I love being creative and all the different lines of business I'm in now with the cooking school and the store allow me to be creative in different ways. Plus, I can stay close to home."

Hudson's on the Bend

Harter says the rebirth of the original Ninfa's starts with Padilla. "I found a chef who had done three restaurants in San Francisco and had worked at Boulevard in San Francisco for 15 years. I told him, 'You understand Mexican food; let's make this a quality restaurant.' And the results have been very good.

"Alex is a star. It takes a different type of chef to entirely retrain a staff, some of whom have been around in some cases for 35 years, and still keep the existing customer base and bring in new customers as well. He's a really great chef and just a real hands-on guy."

Legacy Restaurants also owns Antone's Poorboy Restaurants and is developing a new brand called Tabernera, a tavern-style Mexican restaurant. Three new Legacy restaurants will be opening soon in Scottsdale, Austin and the company's hometown, Houston. At least one of those locations will be the new concept for Ninfa's – Ninfa's Mexican Kitchen.

"There'll never be another original Ninfa's," says Harter. "We want to create our own new Ninfa's model. The new Ninfa's will probably be more modern and gleaming. You'll never duplicate that old quirky building on Navigation.

"We really feel like we have original Ninfa's set for the next decade, and we're going to keep introducing new items and keep it fresh and good and keep up the quality. That wasn't an easy task. We're now three years into that. Now we're looking at other locations. We're anticipating three new openings this year for Ninfa's Mexican Kitchen.

Our goal was to get it back to Mama Ninfa's original intention which was never sacrificing quality, putting your best foot forward

"We're looking at finding good, second generation space that we can convert for a lesser cost than a new space would cost. But we understand that comes with the baggage of being a location where a restaurant failed in the past. So you have to go in there with the right concept and a good PR angle from the start. And we've been able to find some tremendous opportunities. We've probably looked at 100 in the past three years and narrowed it down to the three we're going with."

Toast almonds and sesame seeds in a dry skillet until lightly toasted. Set aside to cool.

Whisk milk and eggs to make an egg wash. Put flour in a flat dish. Holding the trout fillet by the tail, dredge it in flour until well dusted. Pat off excess.

Pass the dusted fish fillet through the egg wash, wetting entire surface. Place fillet in crumb mixture, lightly pressing crumbs on the fillet with the palm of your hand. Remove and shake off excess. Set aside on a dry sheet pan or cookie sheet until all fillets are breaded.

In a large, heavy sauté pan, heat 6 tablespoons clarified butter to about 325 °F or until parsley sizzles when tossed in. Lay trout fillet skin-side up in hot pan. Sauté for about 3 minutes on each side. It will cook to a golden, crunchy brown. Turn fillet once.

Place each fillet on a cookie sheet in warm oven (180 °F) until you have completed this process for all fillets.