The nut of choice in Texas is the pecan. 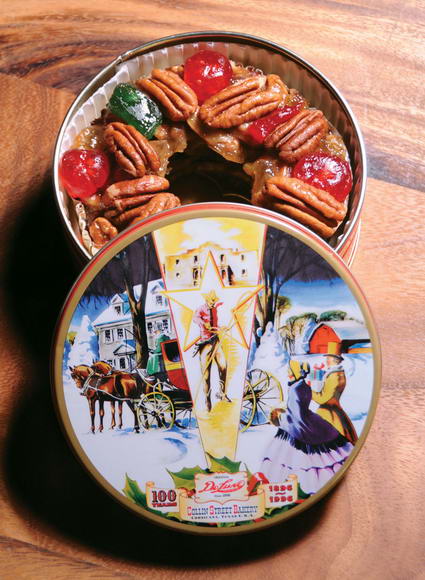 'Tis the time for UPS and the mail carrier to be burdened with that much maligned holiday treat, the fruitcake.

I don't know why fruitcake became the butt of so many jokes. I like it, and I have never seen anyone turn down a slice. I imagine part of the problem is the long shelf life fruitcake has. Under proper conditions, one will keep in good condition for several months. Try that with your Betty Crocker.

The prime reason for the fruitcake being defamed is that folks are apt to "re-gift" them. That is, they will get more fruitcakes than they can use and will stow a couple away on top the icebox or somewhere. Then they need a gift for someone, so they give the aged fruitcake.

A fruitcake is made up of several things that are pretty much standard in all fruitcake recipes: nuts (in Texas the nut of choice is the pecan), walnuts and almonds can be used. I have never heard of a fruitcake with peanuts in it. Of course, peanuts are a legume like a bean, but they serve as regular nuts in a lot of recipes. The advantage in using peanuts is they are way less expensive than their cousins with the hard shells.

Candied fruits are found in traditional fruitcakes. They are usually pineapple and cherries. Candied citrus rinds are another proper ingredient. All are made by boiling the fruit or rind in sugar water until they absorb all they can.

The spices most often used are cinnamon, nutmeg, ginger, and cloves. Of course, there is flour and maybe an egg or whatever. It's all mixed up and baked a long time.

For some reason, fruitcake has an affinity for alcohol, as do most things in the holiday season. In Texas we like to wrap the cake in a clean cloth that has been moistened with bourbon. Then the wrapped cake is sealed in clear wrap or foil and allowed a week or two to absorb the flavor of the bottled sunshine. Some foreigners add brandy to the recipe while mixing. I'm sure there also folk who will dribble in some rum, tequila or Mad Dog 20-20.

The Italians have a version of fruitcake called pan forte. Pan forte contains chocolate, an ingredient usually missing from our American fruitcakes. If I were not on my diet, I would whip up a pan forte, but it's a bit rich for my constitution. But if you have one of those exercise machines and the instruction DVD and can lose twenty pounds in a week, here's a recipe.

Line springform pan with parchment paper, using a round for bottom and a strip for the sides. Butter the paper well and dust with cocoa powder, knocking out excess.

Whisk together the flour, spices, salt, and 4 teaspoons cocoa in a large bowl, then stir in nuts and fruit.

Bring the sugar and honey to a boil in a 2-quart heavy saucepan over moderate heat, stirring until sugar is dissolved. Then boil without stirring until thermometer registers 238 to 240°F, about 2 minutes.

Immediately pour the honey syrup over fruit mixture and quickly stir until combined (mixture will be very thick and sticky). Quickly spoon mixture into the springform pan, spreading evenly with back of spoon. Dampen your hands and press the mixture firmly and evenly into the pan to compact it as much as possible.

Bake in the middle of your preheated oven until the edges start to rise slightly and become matte, 50 to 55 minutes.

Cool pan forte completely in pan on a rack, then remove side of pan and invert, peeling off the paper. If making ahead, wrap pan forte (see note, below). To serve, cut with a serrated knife into small pieces.

You know I always have an old family recipe for every occasion. This is my holiday cake. I guess it is technically a fruitcake because it does contain fruit. I adapted this recipe from my mama's cookbook. There, it was a prune cake. Here it is: Raven's idea of holiday cake.

Cream the butter and sugar together. Add the eggs and combine well. Sift together dry ingredients and add alternately with water. When everything is combined, add the raisins and nuts that have been dredged in a little flour. Mix well.

(I bake this cake in a bread pan, but it's really a little small for this recipe. A bunt pan would be about right.)

Happy Holiday to one and all! Thank you for reading Texas Cooking. I will be back next year.