Making the Most Challenging Wine in the World 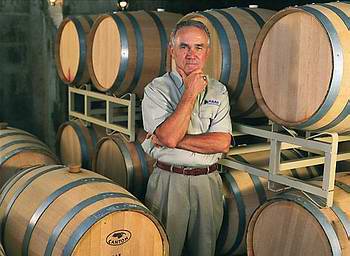 Raymond Haak certainly doesn't mind a challenge. Not only did he open his winery, Haak Vineyards, along the Pierce's Disease-plagued gulf coast, he's also making some of the most challenging wine in the world.

Haak says it wasn't his choice to open the only winery in Galveston County. It's just where he happened to be. "This is where the good Lord chose for me to be. It's not like I looked around the state and then decided to open a winery in Santa Fe."

It's not surprising there are no other wineries in the neighborhood. Pierce's Disease (PD), a pathogen that eventually kills grapevines, is rampant along the gulf coast making it almost impossible to grow grapes. Two varieties that are PD resistant are Black Spanish and Blanc DuBois. That's what Haak grows in his three-acre vineyard.

"We don't really have a PD problem," he explains. "We put in PD resistant vines from the start. We acknowledge that it exists and we deal with it. The people who have a real PD problem are the ones who refuse to admit it exists. A lot of grape growers are in denial.

"We started growing grapes around 1969. My wife brought home a couple of vines and we planted them alongside the house. We drank a little bit of wine back then but I didn't really know anything about it."

37 years later Haak's hobby has turned into his passion. "We just fell in love with grapes. We made a little wine from those first vines. We enjoyed it so we put in 30 vines. We did that for six or seven years and decided if 30 vines was fun, then 300 vines would be ten times as much fun," Haak laughs. "That's kind of how it all evolved."

Haak Vineyards, which opened to the public in 2000, is still evolving. The winery buys most of its grapes from other growers around Texas but uses its own Black Spanish to make port wine.

"Jacquez (Black Spanish) grapes grow in Spain, Portugal and on the island of Madeira. I've been told our port wine tastes like a fine, old Madeira wine and that kind of made a light come on. We're going to introduce the first Madeira wine ever made commercially in Texas. As far as I know, we're only the second winery in the United States that's producing a Madeira."

Madeira wine is created using an estufagem process. After the grapes have been crushed and the must partially fermented, it is fortified with alcohol (usually brandy) to create a port wine. In the estufagem process that wine, which has already been aged for three to four years, is then heated to 55 degrees Celsius (131 degrees Fahrenheit) and further aged at that temperature. It's a complex, expensive wine-making process. Because the wine is exposed to heat and oxygen during its development, an open bottle will keep in good condition for years.

It's that sense of adventure that drives Haak's winery. "I'm interested in discovering the Texas terroir. We're just now learning what our state can produce by planting the correct varietals in the correct locations. We're discovering our appellations right now. It's a fun time to be in the wine business in Texas."

"Right now, pretty much all the wines I produce are 100 percent varietal. I don't do any blending. It's not that I'm against blending. It has a great deal to offer and makes some outstanding wines. But right now, I want to see what each fruit variety has to offer. All the grapes I use are 100 percent grown in Texas and once I think I've learned as much as I can about those Texas varietals, then I'll do some blending."

The vineyard's blanc dubois grapes are used to produce two different styles of white wine. "Our dry blanc dubois is very much like the sauvignon blancs of New Zealand with very clean, crisp flavors," says Haak. He adds that the semi-dry version is in the reisling style with a fruity, tropical flavor. He also intends to use blanc dubois grapes to create a white port which he will then to process into a white Madeira.

"About 40 percent of the wines I produce are white and slightly sweet. My personal opinion is, and I was the same way, that when people first start drinking wine and appreciating it, their palates run toward sweet wines. Texas wines are generally fruit forward. It depends on the consumer's palate. I'm not saying that Texans' palates aren't educated but there are a lot of nouveau wine drinkers in Texas and those are the folks who like sweet, fruity wines. That's what's driving wine makers in Texas in the direction we're going. As the Texas palate matures I'll feel like we'll move a little more toward the drier end of the spectrum. That's not to say we'll give up sweet wines but I think we'll move more towards the drier, more complex wines."

Haak Vineyards recently completed an expansion raising its annual capacity from 8,000 cases to 20,000 although Haak doesn't plan to grow that large.

"Our growth is going to be driven by the market, of course," he explains. "I don't really want to be a large winery. I'm more interested in making extremely good, premium quality wines that I can be proud of. I want to express the terroir and climate of Texas."