For those of you who don't know Larry and me, we're a mixed marriage couple; Larry is of the cooking persuasion, and I write. Together, we have two cookbooks and are currently working on a third.

Our home is in Lockhart, the BBQ Capital of Texas but, for a brief period of time, we lived on the Texas coast where our dock was located next to the Bear Brothers shrimp boat. What a stroke of luck! Shrimp was the commodity they used in exchange for our fresh water and electricity and, believe me, we quickly became the Bubba Gumps of shrimp! 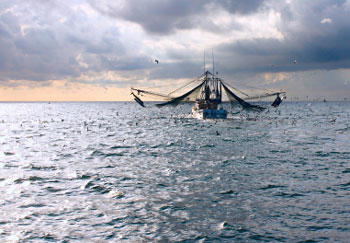 We are not the only Gumps around though! Shrimp is the most popular seafood in the United States, and Texas is one of the top producers. In fact, shrimp is so popular here that the Texas Department of Agriculture has devoted a website just to shrimp at http://www.txshrimp.org. And you thought Texas was all about beef.

But, wait. Maybe you're still hearing on the party line that shellfish (like shrimp and crab) are high in cholesterol. Well, here's an update from the Mayo Clinic:

(April, 2006): The commonly held view that shellfish are high in cholesterol was due to a chemical compound called sterol. Cholesterol is only one among the many sterols that naturally occur in plants and animals. Previous and less sophisticated testing had grouped all sterols under cholesterol. So, the cholesterol levels for shellfish generally looked high.

And, here's another piece of info: shellfish are naturally low in sodium and fat, plus they contain the "good" fat that everyone's talking about called Omega-3, which is associated with lower cholesterol levels and reduced risk of heart disease. Doesn't that make you feel healthier just thinking about it?

Now, I'm betting that the majority of you who are reading this article don't live along the Texas coast where you can get fresh seafood, so let's just buggy up some shrimp and crab from your local grocery store or internet resources.

Store-bought shrimp are available fresh-frozen, frozen, and canned. The fresh-frozen shrimp are found in the seafood or meat market area of your grocery store. If you want to be sure that you're buying Texas shrimp, just ask before buying. Select shrimp with a mild, clean smell and firm texture. Avoid those that have a strong, offensive odor, especially of ammonia. Also avoid shrimp with excessive black spots on the shell or meat.

Texas' most popular crabs are Blue and Stone. Both have rich, dense meat and compare in sweetness to lobster. The big difference between the two is that, as opposed to gathering meat from the whole Blue crab, only one claw is allowed to be removed from the Stone crab, and that will grow back in about 12 months time.

The Blue crab will yield two or three ounces of meat, while the Stone crab claw will yield about one ounce of meat. Both the Stone and Blue crab crabmeat (other than live) is cooked before it's packaged and can be used without further cooking. This cooking process is known as pasteurization and, if not canned, must be kept refrigerated. The meat will keep for up to one week in the refrigerator. Since it doesn't freeze well, the maximum time in the freezer should be three weeks.

Blue Crab is available in live form at the grocery store. But, be careful. These little critters will just as soon pinch your finger in half as look at you. To cook, drop them into a large pot of salted water that has come to a rolling boil for approximately 15 minutes and the shells have turned red. Drain off the water and rinse in cold water for a few seconds to stop the cooking process. Then serve whole, or pick the meat to be used in other recipes.

Stone Crab claws from the grocery store can be stored in a plastic bag and kept in the freezer for up to six months. To thaw, place in the refrigerator overnight. Do not thaw in cold water as with shrimp. You can serve the claws intact or use the picked meat in any recipe calling for crabmeat or lobster. Around two and one-half pounds of medium size stone crab claws will generally provide about one pound of picked crabmeat.

Now that you know all about shrimp and crab, here are some keeper recipes that make the most of them. Larry's Enchiladas del Mar is incredibly delicious and very filling.

This dressing can stand on its own as a main course, or it can be served as a side dish or as you would serve dressing with any holiday meal.

Melt 2 tablespoons of butter in a skillet (do not brown butter), and add shrimp and crab, sautéing over low heat for 3 minutes.

In another skillet or saucepan, melt 3 tablespoons of butter over medium heat and add chopped onion. Cook over low heat until onion has softened. Add flour and stir until smooth. Beat egg and stir into milk. Pour into mixture and continue stirring while adding Parmesan cheese, parsley, salt, pepper and nutmeg. Remove pan from heat and pull out 1 cup of sauce, setting it aside.

Add crabmeat and shrimp to remaining sauce in pan and sauté over low heat for 3 minutes, constantly stirring. Remove from heat and place about 3 tablespoonfuls of seafood mixture into each tortilla, then roll tortilla closed. Place stuffed tortillas into a baking pan, seam side down, and pour remaining 1 cup of Mornay sauce over them. Top with Monterrey Jack cheese and place in oven for 3 minutes. Remove and serve.

Using a sharp knife, slice a very thin layer off the bottom of each bell pepper, without cutting through the bottom. Your peppers will then sit up straight while baking.

In a large bowl, mix together the bread dressing, crabmeat, shrimp, green onions, salt, and pepper. Place the bell peppers on a cookie sheet and stuff with the seafood/dressing mixture. Place the tops back on the bell peppers and cook in the oven for 25 to 30 minutes and remove from the oven. To serve, place each pepper on a plate with the tops leaning next to them. Spoon or drizzle Béarnaise Sauce over the top.

Béarnaise Sauce Using a small saucepan over medium-low heat, simmer wine, shallots or green onions and tarragon until mixture is reduced to about 2 tablespoons. Remove from heat and set aside.

In a separate saucepan, add the egg yolks, salt, pepper, and lemon juice. Cook over low heat until thickened to a consistency of heavy cream. Beat constantly and add butter one piece at a time. Add wine mixture and lightly stir. Serve over meat, eggs, or vegetables. Makes 3/4 cup sauce.