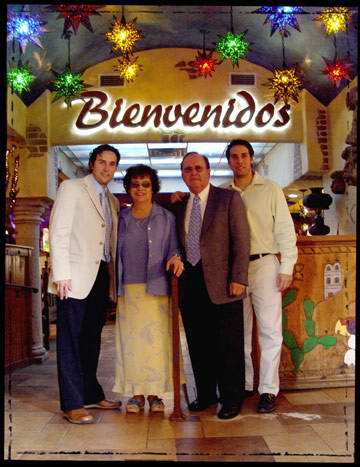 Carlos and Gabe were only two-years-old and their sister, Jessica, was barely four when their parents bought a popular Mexican restaurant in the tiny hamlet of Helotes, well outside San Antonio in 1972.

"The restaurant had already been here 24 years," Carlos explains. "My dad came over and sat in the parking lot every night for a week before they bought it. He saw lots of Cadillacs and Mercedes so he knew it had a lot of potential.

Carlos senior, better known as Charlie, and his wife, Mary, had to sell their house in San Antonio in order to afford the restaurant. They moved their young family into a small house behind their new business and went to work.

"Dad was having a hard time keeping a job. Mom says it's because he can't work for anyone else."

One of the first decisions that had to be made as the family took over the restaurant was who was going to do the cooking. Outgoing chef Irene Zepeda had the answer. "Charlie will. I'll teach him."

With Charlie in charge of the kitchen, Mary took care of the books.

In a city with more than 5,000 Mexican restaurants, it's hard for one to stand out. El Chaparral has kept a traditional Mexican menu featuring all the usual favorites. Carlos' Special, a generous combination of enchiladas, tamales and tacos, is the biggest seller. "I think the two things that set us apart, more than anything else, are my parents," Carlos answers. "They've always treated their customers and their employees well. They took care of the people and everything else took care of itself. We have employees who have been here since before I was born."

San Antonio has grown considerably in the 33 years since the Garcia family took over the restaurant and so has El Chaparral. Carlos laughs as he explains the only thing that's left of the tiny house his family lived in is the floor of the walk-in cooler behind the bar. "The linoleum's still there. That's all that's left."

While Helotes maintains its stubborn independence, what was once a widespace in the road is now basically a suburb on San Antonio's booming northwest side.

Carlos and Gabe have played a lot on their way to taking the reins of the family business. Most of it has been on the soccer field. Both played for the University of North Carolina before turning pro after graduation. "I retired in 1997. I got tired of kicking a ball around," Carlos says. "Gabe retired in 1998."

Even during their playing careers the brothers would spend time in the restaurant during the off-season. "The season only lasted a few months so when we weren't playing we were here. When I retired in '97, Dad invited me to come work here fulltime and see how I liked it." Carlos also saw the potential in the business. "It was busy, it was successful but I saw a lot of things I didn't like."

In a city with more than 5,000 Mexican restaurants,
it's hard for one to stand out.
His biggest concern was the bustling restaurant's lack of space. The family was having to turn business away because there simply wasn't anywhere for people to sit.

"My dad had been talking about adding a patio for years. It had been a dream of his. I went to him and told him that if we were going to expand, let's do it right."

The restaurant stayed open during the two-year renovation project which was completed in 2004. "We couldn't afford to close. We put up walls to separate the dining room from the construction then we took them down again. It was kind of like a maze for a while," Carlos laughs.

The noise and debris of the renovations took their toll on business. "The first year after the construction was tough. There were lots of new restaurants opening in the area and not everyone knew we'd finished our construction so business was down. Every time a new restaurant would open we'd take a hit for two or three weeks and then business would come up again. We're doing more business than ever now. I'd say it's tripled or quadrupled since we finished the renovations."

The expansion not only added a patio to the facility but brought the square feet up to 12,000. What had been a homey but somewhat dated location is now a bright, well-decorated family gathering place. The restaurant now seats 300 inside and another 100 on "Jessica's Jardin." The patio was named after the oldest of the Garcia children, Jessica, who was killed in a car accident in 1996.

"She'd always wanted a patio," Carlos explains. "Her spirit's still here with us. She's still a part of what we're doing."

Even with the new additions, El Chaparral has a wait on weekends. "It's an amazing thing to see. We're full for four hours on Friday and Saturday nights. We're very fortunate." One sign of the restaurant's enormous volume is its daily consumption of between 25 and 30 gallons of freshly made salsa.

The success of the Helotes operation has prompted the brothers to open a second location in Boerne. "It's not as big as this one. It's two stories and we can seat 150. The kitchen's not as large as this one either so we can't have everything on the menu that we have here but we still have all the favorites."

With his sons in charge, Charlie has moved out of the kitchen but not out of the restaurant. "He's still here nearly every day," Carlos laughs. "He greets people and makes sure everyone is enjoying themselves. He's very serious about customer satisfaction. He still goes from table to table to make sure everyone's ok. We've got a full time bookkeeper now but mom still keeps an eye on things. They like to stay involved. They like being here."

So does everyone else. 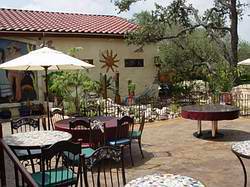