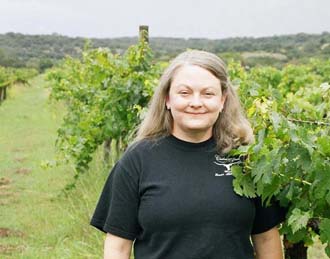 When winemakers talk about their training the conversation eventually turns to the University of California at Davis. Home to the country's premier viticulture (grape growing) and enology (wine making) training programs, UC Davis is the Harvard of winemaking.

When Chisholm Trail Winery's Paula Williamson decided to make the switch from being one of thousands of lawyers in the United States to being one of only a handful of female winemakers, she got her education a different way.

Williamson and her husband, Harry Skeins, Jr., decided in the early 90s they didn't want to be lawyers anymore. "We hated it. We were both litigation attorneys and we were at the point where we hated going to work in the mornings."

So, with more enthusiasm than experience, they bought a plot of land nine miles west of Fredericksburg and planted a few cabernet sauvignon grapevines.

"My training has all been in law," Williamson explains. "Which, by the way, brings nothing to winemaking. But I learn by deposition. I learn by listening." And that's what she did. For three years.

She listened to Vernon Gold, a winemaker at another hill country winery. Still practicing law in San Antonio, Williamson would show up on Gold's doorstep every weekend with a list of questions and pay close attention while Vernon answered them.

"I came in one weekend and he wasn't there. They told me he'd retired. My first question was, 'what's his phone number?'"

Gold agreed to become a consultant for Chisholm Trail which still hadn't produced a single glass of wine. "We sold our first three crops. We held back a few grapes and that's what I practiced on." Once Gold was on the Chisholm Trail payroll, Williamson stopped coming to him. He, instead, came to her. "He'd come to my office every Sunday and I'd have a court reporter there. We did volumes and volumes of transcriptions. He'd bring his notes and I'd ask him questions while the court reporter took it all down. Everything from, 'OK, I'm out in the countryside looking for property. What do I need to look for? all the way to shipping the wine out the back door." 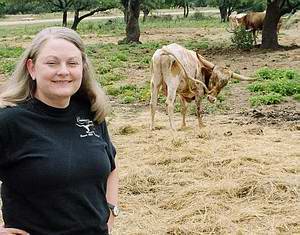 Paula Williamson with a mascot longhorn

At the same time Williamson and Skeins were building their winery. The original plan had been for them to share winemaking duties. Once Skeins saw how much chemistry was involved, he started spending more time in the fields. "I became the winemaker by default when he started finding reasons not to show up for the meetings with Vernon," Williamson laughs. "Now, he grows the grapes and I make the wine."

One of the topics she discussed with Gold was how the new winery would be designed. She'd seen other winemakers dragging four-inch hoses up ladders to the tops of their storage tanks. "There was no way I was going to be able to do that," she admits. "We needed to make this winery female-friendly."

Gold's answer was to design a series of catwalks enabling Williamson to move easily among the rafters. "I'll always be thankful to Vernon for those catwalks. I couldn't do what I do without them."

Gold didn't get to see his apprentice's first release. He died in the summer of 1999. "It was pretty scary making the wine in the fall of '99 without him. I had his notes plastered everywhere. I'd work in the lab for a little while and then I'd run check his notes and then run back to the lab," Williamson says.

Even with Gold's spirit looking over her shoulder, Williamson still relied on science. "Vernon taught me almost everything I know about winemaking but I still went out to UC Davis for a couple of classes. It's really tough," she laughs. "You have to stay in the California wine country and visit all these vineyards between classes. It was a sacrifice, but one I was willing to make."

The Chisholm Trail Winery is still a work in progress. Plans for a wine storage room, bed and breakfast, cafe and a western saloon-style tasting room are all in the works. The vineyard has grown to 23 acres which are well-fenced to keep out the herd of longhorns (the winery's mascot) and quarterhorses that share the grounds.


Select your Exact Hotel or Name Your Own Price

The best kept secret at Chisholm Trail is the 2001 estate-bottled merlot. "It hasn't won any medals," Williamson admits. "But only because I haven't entered it anywhere. It's my favorite. We're down to our last 80 cases. It won't last much longer."

Williamson doesn't try to fit her wines into a category. "I probably started out making French wine, but I realized pretty quickly that it wasn't going to sell. Texans like a sweeter wine without so much wood. I guess if I had to say what style my wine is, I'd say it's Texas style. It's hot here and we like our spicy food, so a lighter, sweeter wine goes better."

As for the future, Williamson is looking forward to modest growth. She describes herself as almost lawless. "I still have a few legal clients but not many. I'm a full-time winemaker and I love it." She doesn't want the winery to expand beyond 10,000 cases annually and expects that growth to take another five or six years. "There's a lot to do between now and then."

Williamson takes a maternal approach to her winemaking. "I think of my wines as my children, always misbehaving. My goal is to get them to behave by the time I get them in the bottle. We've been pretty fortunate so far. We haven't had any major mistakes."

Mix the first four ingredients in a blender, add ice to taste.

Mix all the ingredients together in a large pan. Heat over medium heat until steaming hot, but not boiling. Serves 8-10.