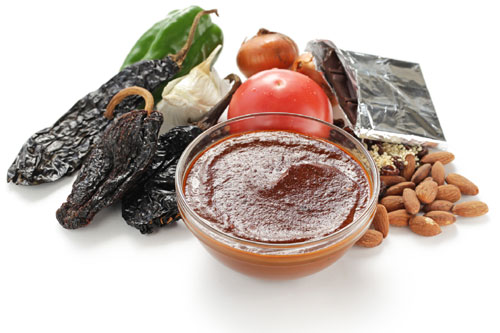 The experience of making mole (pronounced mo LAY) is one of the most satisfying culinary experiences I have ever attempted. It took me all day, but it was worth every minute when my friends took their first bite.

I have made mole three times now. The first time, I made it alone. My kitchen was a disaster area for days. The smell lingered even longer. My clothes, counter top and dish towels were all stained. But I had a fabulous time and felt it was almost a spiritual experience. I was not prepared for the many steps involved and the assortment of unusual ingredients but in the end, I had successfully created a traditional, culinary masterpiece and was very satisfied and exuberated by the experience.

In fact, I daydreamed I was Tita in Laura Esquivel's novel Like Water for Chocolate, in a rustic kitchen in northern Mexico in 1910 collecting the ingredients for mole and putting them in an earthenware pot. I really got into it that first time.

The word mole comes from the Aztec word "molli", which means concoction, stew, or sauce. In Mexico, mole recipes are passed down from generation to generation, vary from town to town and from family to family. Mole is a complex rich thick sauce, which is traditionally used to accompany chicken or turkey. It is made from a variety of chiles, onions, garlic, cumin, coriander, cinnamon, cloves, sesame seeds, several types of nuts and a small amount of chocolate.

Its best-known ingredient is the chocolate, which contributes richness to the sauce without adding much sweetness. Grated avocado pit is even used in the recipe to add a balancing bitterness.

Making Mexican mole is not for the timid. It requires a commitment to authentic ingredients as well as a commitment to following each step precisely and without taking any shortcuts. The second time I made mole, I was aided by two friends, and we prepared it for a New Year's Eve dinner where we served it with turkey.

This last time I made mole, my boyfriend and his sister joined me. It took all three of us a total of four hours. We followed the recipe for Teloloapan Red Mole from the marvelous cookbook Rick Bayless' Mexican Kitchen. I consider my boyfriend to be a mole expert, as it is his favorite food. Because of his discriminating taste for this delectable sauce, I believe this was the best batch ever.

Making mole is not for the timid.

This particular recipe requires twenty-five ingredients. I tried counting the steps, and came up with no less than fifty. Rick Bayless insists, in this recipe at least, that the chilies and nuts all be fried (rather than dry-toasting) separately. The seeds from the chilies are toasted with sesame seeds and added to the mixture. The spices are pulverized into a spice grinder (I use my blender). Bread and corn tortillas are dried out and fried as well.

The chilies are fried in batches for 20-30 seconds only. If they are cooked any longer, they will get bitter and must be discarded.

Raisins are the last ingredient to be fried, and then all the nuts are mixed with sautéed tomatillos, tomatoes, onions and garlic, and then mixed with chicken or turkey broth, blended and strained.

The peppers are blended and strained as well. It really helps if you have more than one person doing all the blending and straining.

Well, your feet may hurt and you certainly don't feel much like cleaning up the mess you've created but, trust me, when you see how shimmering and shiny the sauce is and how richly colored, how aromatic your house is (inside and out), you see that each step played a crucial role in the success of this delicious sauce.

I had already purchased some sliced turkey breast from Central Market South in their rotisserie, so we all sat down when we were finished and had the mole with the turkey along with some corn tortillas. We moaned and groaned with each delicious bite we took, and we were proud of our efforts.

Tex-Mex Recipes From Grandma's Cookbook
I encourage you to attempt this marvelous feat on your own.

For the Ancho Chili Paste: To finish the dish:

Ancho Paste: Roast the unpeeled garlic in a heavy skillet over medium heat until soft and blackened in spots, about 15 minutes; cool and peel. Toast the chiles by opening them and pressing them flat in the same pan for a few seconds on each side. Soak the chiles in hot water for 30 minutes until they are very soft. Drain. Process the garlic, chiles and remaining ingredients with for the ancho chile paste with 2/3 cup broth in a food processor or blender until smooth. Press through a medium mesh strainer into a bowl.

To Finish: In a medium Dutch oven, heat the oil or lard over medium heat. Add the almonds and cook, stirring until lightly toasted, about 3 minutes. Remove the almonds with a slotted spoon to a blender or food processor. Add the onion to the pan and cook until browned, about 10 minutes. Remove to the blender with the almonds. Add the raisins and stir for a minute as they puff. Put them in with the onions and almonds.

Next, roast the tomatoes on a baking sheet 4 inches below a very hot broiler until blackened on two sides. Cool, peel and add to the blender with the cinnamon, chocolate and bread. Add 1 cup of broth and blend to a smooth paste.

Reheat the Dutch oven. When hot, add the ancho mixture and cook, stirring almost constantly until darker and thick, about 5 minutes. Add the puréed almond mixture and cook another few minutes until thickened again. Stir in the remaining 4-1/2 cups broth, partially cover and simmer, stirring occasionally, over medium-low heat for 45 minutes. Taste and season with salt and sugar (it should be slightly sweet).

Serve the mole with roasted, grilled or poached poultry (chicken or turkey), either coarsely shredded or in whole pieces. This makes about 6 cups of sauce and will serve 6 to 9 people. The recipe can be doubled.