Frozen Pies: Pies from the Freezer

When it's too hot to cook, use your freezer instead of your oven.

Most of us enjoy ending a meal with a treat, but summer isn't the best time to labor over a baked dessert. When it's too hot to cook, use your freezer instead of your oven.

Frozen pies are easy to make and, although they do require advance planning, most recipes specify a fairly short freezing time. It's always nice to have a pie hidden in the freezer for unexpected company or a night when a plain supper could use an extra boost. 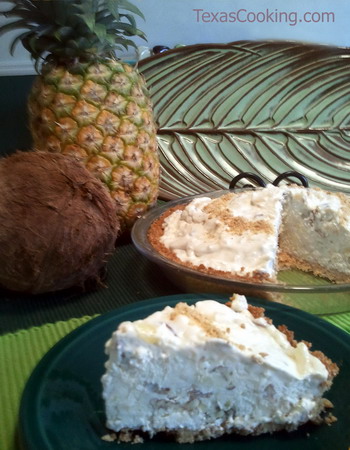 There are two secrets to successful frozen pies. The first is to wrap the pie carefully once it's frozen. Neither plastic wrap nor foil will protect a pie adequately. The best solution seems to be large size freezer storage bags. Most 9-inch pie plates will slip inside a one-gallon bag, and some stores carry two-gallon bags. Seal the bag, and the pie will stay fresh without absorbing any other odors from the freezer.

The other secret involves piecrust. Pies that are to be frozen are usually prepared using a graham cracker or cookie crust, since these crusts freeze well. Using a homemade crust will make a noticeable difference. There's no comparison between a packaged crust and one that's freshly prepared.

A graham cracker crust requires just three ingredients and is simple enough for beginners. Several brands of graham cracker crumbs are available with a crust recipe right on the box. And even though some recipes don't require baking, do yourself a favor and bake the crust. Crusts that aren't baked won't be crispy and crunchy because the butter sets up and gets hard when the crust is chilled. A baked crust will have a much better texture and flavor.

Fillings for frozen pies are easy. Most recipes require just a handful of readily available ingredients and can be mixed in one bowl. Since baking isn't an issue, once the filling is mixed the pie is ready for the freezer.

Save time and stay ahead of the game by making two pies at once. When well wrapped, a frozen pie will keep for at least a month. Of course, that theory doesn't usually work because they seldom last that long. The cook always knows there's a pie available, and in the summer it's amazing how many dinner emergencies occur.

The recipes that follow are quick and easy. Included is a graham cracker crust recipe, and it's slightly different than what's given on a box of crumbs. The small amount of sugar adds flavor to the crust. The first two pie recipes are the one-bowl type, can be mixed in minutes, and can be doubled easily. The last recipe requires more effort, but you end up with two pies.

Preheat the oven to 375F degrees. Combine the crumbs and sugar. Melt the butter in a small mixing bowl in the microwave oven. Add the crumbs all at once, stirring with a fork until the mixture is well blended and the crumbs are moistened. Dump the crumbs in a 9-inch pie pan. Spread with the back of a spoon to form the piecrust. Do not build the crumbs up on the rim of the pan. Bake 6 minutes. Remove from the oven and cool completely before filling.

Combine the milk and lemon juice in a bowl. Stir well. Add the drained pineapple, coconut and pecans, mixing well. Gently fold in the whipped topping. Pour into the crust. Freeze until firm, at least 4 hours. Remove from the freezer about 15 minutes before serving.

Cover any leftover pie loosely with foil or place inside a large freezer storage bag and return to the freezer.

Combine the cream cheese and peanut butter in the large bowl of a mixer. Beat together until smooth. Gradually beat in the sugar. Add the vanilla. Use a spatula to fold in the whipped cream until well blended. Spoon the filling into the crust. Freeze at least 4 hours. Remove the pie from the freezer about 20 minutes before serving.

Return any leftover pie to the freezer.

Use an electric mixer to combine the cream cheese and condensed milk, mixing until well blended. Fold in the whipped topping and one-half of the coconut mixture. Pour one-fourth of this mixture into the bottom of the two crusts. Spoon on as much caramel topping as you wish. Pour over the rest of the cream cheese mixture. Sprinkle with the remaining coconut and pecans. Freeze the pies at least 4 hours. Remove from the freezer about 20 minutes before serving time.

Return any leftover pie to the freezer.