It's a Texas-style, Norman Rockwell memory for me.

When I was a kid growing up in Houston, a friend of mine had a farm outside of Navasota on the Brazos River. We would go there for the weekend every once in a while.

We visited with his grandmother, who lived there, and did all the things you would expect to be able to do on 100 acres that bordered the river, including the chores around the farm. One of the activities included gathering catfish. 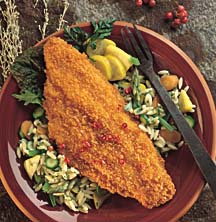 This wasn't your typical fishing. We would throw a long stringer of hooks anchored with a large rock into the middle of the river. The hooks were baited with hot dogs. The next day we would pull in the line to find at least four or five catfish on the hooks. I doubt this was legal, but that's just the way it was done. Being a city boy myself, I didnt know any better. My friend would then release the live catfish into the stock tank where the livestock watered. It was a small man-made pond, and the fish thrived there. If we wanted a fresh catfish, we would get out the fishing poles and just wet a line in the tank. If we didn't catch a fish almost immediately, we would go to the river to get more.

His grandmother would pan fry those catfish fillets coated with a little seasoned cornmeal. They were always pretty good and always fresh, and sometimes a little gamy. It's a Texas-style, Norman Rockwell memory for me.

Years later when I was in the service, I was witness to an awesome spectacle. While fishing one day in the river where our ship was docked, a friend of mine hooked, fought and finally landed a catfish that weighed in at 24 pounds. It was a monster! After verifying that it wasnt some kind of record, there was a little bit of debate as to what to do with the beast. My friend decided to have a Catfish Fry.

We had all the fixings. Beer, coleslaw, beer, catfish, beer, French fries, beer, tartar sauce, beer, and of course, beer. It was a beautiful day. We had plenty of people, and everyone was having a good time. The fish cooked up without a hitch, and everyone was filling up their plates in anticipation of the catfish. One bite into that crispy flaky catfish and thats about all anyone could stand. Even with all that beer, that catfish was absolutely inedible! It tasted like motor oil mixed with mud.

The problem wasn't with how the catfish was cooked -- it was the fish, itself. Catfish are bottom feeders. They eat anything that settles to the bottom of lakes or rivers. Depending on where that is, it can contain all kinds of things you wouldnt want to eat, not to mention the pollution. The older the catfish is, the more that potentially nasty bottom becomes part of the fish. You are what you eat, and so are catfish. Our monster was definitely a product of years of hanging around the bottom of a ship dock. That catfish-eating experience made a big, negative impression on my young mind, and I avoided catfish for a long time.

Then one day I had some really good catfish without even knowing it was catfish until after the fact. It was sweet, tender, flaky, and very mild tasting. I learned that it was farm raised. I am not saying that you cant get a good catfish from the wild, but you can definitely get good catfish in the store. Farm-raised catfish are treated in such a way that they are guaranteed to taste good. Catfish ranchers use a nutritionally balanced feed that floats on top of the water, so the catfish learn to eat from the top of the water instead of off the bottom. Also, farm-raised catfish are typically processed before they get too large. The larger the catfish, the more gamy the fat on the fish becomes, and the worse it can taste.

If you get your catfish from your own fishing pole, you can marinate the fillets in buttermilk overnight to eliminate some of the gamy flavor. You can also use traditional marinades to mask traces of gaminess.

If your catfish honey hole happens to be the local supermarket, then cook that critter however you want. It will almost always be good.

So, what do we want to eat today? Catfish can be prepared any way you would prepare other kinds of fish. Its mild and flaky. It has a firm flesh that stands up to any cooking technique. You can grill it, fry it, poach it, smoke it or broil it. With that in mind, I have a few different recipes.

The first time I had anything blackened was back in the 80s when Chef Paul Prudhomme first introduced the technique, and it became a wild trend. My father, who is probably reading this and will be upset with me for telling the story, actually smoked us out of the house one day when trying this cooking technique for the first time. The neighbors wanted to call the fire department. Not only does blackening generate a ton of smoke, but the smoke created is very irritating to the lungs.

If you attempt to blacken something, my advice is to do it outside on a large propane burner. Restaurants have industrial vent hoods that can handle the smoke, but most home vents wont even begin to work well enough. The other hazard involved with blackening is the extreme heat you have to work with. The oil in the pan is actually on the edge of igniting, or at the flash point. This oil will burn you severely and very quickly if it splashes on you (I have the scars to prove it), so you must make sure to use small amounts to prevent splashing.

Blackened Catfish Coat your catfish filets with the blackening spice. IMPORTANT: Cook this dish outdoors unless you want the fire department to show up at your house. Not only will the process generate a ton of smoke, the smoke is very irritating to the lungs. Avoid breathing any of the smoke.

Heat your cast iron skillet at full blast until it is extremely hot. Using about a tablespoon of butter in the pan, quickly sear and blacken your fish. This should take about 1 to 2 minutes per side. Be very careful when you are turning the fish. Use a spatula and tongs so you dont splash it down into the hot butter. Your fish is done when it is black and crispy outside, moist and flaky inside.

If you are going to try to cook this indoors, use the bronzing method. This would be a normal saut technique over medium-high heat. Coat only one side of the fish with the blackening spice, and cook that side down first. Cook for 4 to 5 minutes per side. This will produce a very tasty fish, but it wont have that crispy blackened coating.

Top with the pineapple citrus salsa below, and serve with rice and vegetables.

Commercial blackening spice works fine, but if you prefer to make your own, here is a simple recipe.

Pineapple Citrus Salsa To remove the segments of the citrus fruit, using a paring knife, cut off the ends down to where you see the fruit to make it flat on both ends. Placing it on your cutting board with one of the cut sides down, use your knife to cut the rind and membranes away from the fruit, top to bottom, revealing the heart of the fruit. At this point, you can see the lines dividing the segments of the fruit. Using your paring knife, carefully cut on either side of the segment lines, working toward the center of the fruit. This will release the flesh of the segments from the membranes that hold them all together. Remove any seeds and carefully cut the segments into small pieces. Combine in a large bowl with the remaining ingredients. Spoon a good amount over your blackened catfish.