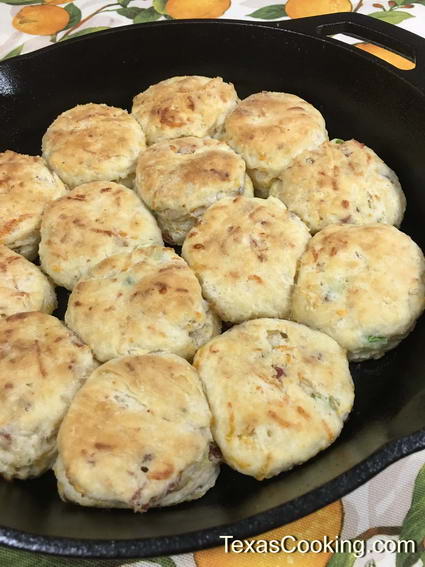 Traditionally, biscuits were the breakfast bread. Grandma got up (never later than 5:00 a.m., you know) and made a batch of biscuits every morning of the world. I'll detail below how she did it. But biscuits are often found on dinner and supper tables all over Texas and throughout the South. [Note: The noon meal is referred to here as dinner, as opposed to the evening meal which is, as we all know, supper.]

So biscuits are versatile? You bet they are. Hot and buttered, they are difficult to resist at any time. But you can also

Late one Halloween after the candy had run out, I once observed my father retrieve two cold biscuits from the back of the stove and drop them into the treat bags of a pair of neighborhood goblins, however, that is neither a popular nor recommended use, even in Texas.

Biscuits are one of the so-called quick breads -- breads that distinguish themselves by rising during, not before, the baking process. It's an apt name, because an experienced biscuit maker can have hot biscuits on the table in a few minutes.

How to Make Biscuits

Once again, as with so many of the mainstays of Texas cooking, the ingredients are simple. Technique is important, though, so here are some tips:

The fact is that biscuits with their simple ingredients and speedy preparation do, as cornbread does, have a place on the twenty-first century kitchen table. The biscuits that erupt from those little cylinders found "in your grocer's dairy case" bear little resemblance to the biscuits that will result from the recipes below.

So here's how Grandma made her biscuits.

Sift the dry ingredients into a bowl. Cut in the shortening with a pastry blender, and add the buttermilk, blending quickly, just until dry ingredients are moistened. A sticky dough will result.

Grandma did one thing that I've never seen spelled out in any recipe: The first thing she did when she made biscuits was melt a rounded teaspoon or so of shortening in her skillet (she always used a skillet). Then, she let the skillet cool while she mixed up the dough. As she cut each biscuit, she would place it in the skillet, then turn it over, all in two quick wrist motions. That way, each biscuit got a thin coating of melted shortening on the top. Because she did it that way, I do it that way when I use a skillet.

Now Grandma made buttermilk biscuits, but there are lots of other kinds. (Biscuits, you know, are a very close relation of the scone.) Listed below are links to Baking Powder Biscuits, which are made with sweet milk, and a really fun biscuit to make, Bacon, Onion and Cheese Biscuits. And if you think you are in too big a hurry to cut your biscuits out, you can make Cornmeal Drop Biscuits.

As a person who loves cooking, I really like to encourage other people to cook. And I don't mean the open-2-cans-and-combine-with-package-mix kind of cooking. Hot, made-from-scratch biscuits can really make a meal, even if it's a quick dinner that does include a few opened cans. And the more often you make them, the faster you get, and the better the biscuits get.