How to Boil Crawdads (and Other Crawfish Etiquette)

No utensils here – this is a Hands-Only meal! 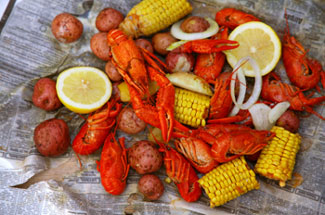 If you live in Texas or Louisiana, you know that springtime (March through June) is crawfish season. That means crawfish festivals like Austin's Swamp Romp, Lubbock's Ragin' Cajun, and plenty of backyard boilin' parties that are truly hands on.

It even comes with its own legend that goes like this:

During the Great Expulsion of 1755-1763, early French settlers were expelled from Northern Maine and the Maritime Provinces in Canada (an area known as Acadia) by British colonial officers and New England legislators. Many of those exiled made their way to Louisiana, where they later became know as Cajuns (derived from "Acadian".)

Sadly though, the Maine lobsters yearned so badly for their Cajun friends that they set off over land and sea to find them, and suffered great hardships along the way. By the time the lobsters reached Louisiana, they had shrunk so much that the Cajuns renamed them crawfish and celebrated with great festivals.

Although it's true that at one time these little critters could only be found in their fresh water habitat along the Gulf coast area, their recent popularity has increased so much that farm raising of mostly the Red Swamp or White River variety of crawfish across the U.S. currently exceeds 100 million pounds per year and even that is expected to double over the next ten years. Aside from the whole crawfish, processed frozen tail meat has also expanded for use in popular recipes like Crawfish Etouffée, Crawfish Bisque, Crawfish Pie and a whole lot more.

Live crawfish are used in the incredible Cajun Mix or Crawfish Boil that includes spices, vegetables, and just about anything else you might want to add to the pot and cook up. Then it's all poured out onto a paper-covered table - ready to eat. No utensils here – this is a Hands-Only meal.

Now, if you're interested in having a crawfish boil and can't get them locally, there are loads of websites to order from, otherwise your next best bet is to check with a grocery store seafood department or local restaurant that specializes in seafood. Just like any shellfish, once you've cooked and peeled them, the meat yield is only about a quarter pound for every pound of live crawfish, so you'll need 2 to 3 pounds of crawfish per person.

Another thing to know is that if your live crawfish haven't been pre-purged, they need to be. Purging cleans the mud out of the stomach and gills, making them taste a whole lot better. Since most crawfish are sold in netted sacks or boxes, if you don't plan to purge and cook them right away, don't take them out of their containers. Instead, gently hose them down, place a wet burlap sack or bag of crushed ice on top to keep them cool and their gills moist. You can also store them in a cooler at a temperature between 38 and 46 degrees. Regardless of how you store them, crawfish should be eaten within 36 hours or they will begin to die.

A word to the wise

Before you're ready to cook, you need to dress like you know what you're doing. That's right; there's a dress code. This is messy eating, so wear something that hides stains like a shirt with a really busy pattern or, if you want to dress like a pro, wear a Hawaiian shirt. One other important item is beer; I've never been to a boil that didn't include at least one ice chest full of beer to help wash down those tasty mud bugs.

When you're ready to purge, place your crawfish into a small wading pool, large tub, or large ice chest and add enough water to cover them, plus 2 to 3 tablespoons of salt per gallon of water. Then stir them around with a paddle for about 5 minutes, tip to drain and repeat the process two more times. Be careful about leaving the crawfish unattended in the water too long or they'll die.

Now, since you're dressed like a pro and are going to cook like a pro, let's make sure that you can peel 'n eat like a pro. Once you've cooked up and poured out the crawfish, take a seat, look for the biggest one out there and grab it up. Grab the head with one hand and the tail with the other, then gently squeeze and twist the tail end and pull the head away and -- here's your choice – either discard the head, or suck the juice out of it. Seriously.

There are two schools of thought for the next step. You can place your thumb on the lower part of the underside of the crawfish and squeeze, which will eject the meat slightly from the top. Grab the meat with your teeth, pull and the rest should follow easily. Or, after you remove the head, hold the ends of the body sidewise with the belly side up and bend each side toward the back. This will break the shell so that you can peel it away and pick out the meat.

Place water in large 4- to 5-gallon boiling pot. Add all spices, juice from the lemons, the squeezed lemons and bring to a rolling boil. Add potatoes, sausage and corn to the pot first and boil for 10 minutes. Next, add the crawfish and boil for about 3-4 minutes. Drain off water and pour the food onto a table covered with butcher paper or newspaper.
Serves 4 to 6.

Melt the butter in a large skillet over medium heat. Add onions, celery and bell peppers, and sauté for 10 to 12 minutes. Add crawfish tails, garlic and bay leaves, cooking for an additional 10 to 12 minutes, stirring occasionally.

In a separate pan, heat the chicken broth and add the flour, stirring well. Then add the crawfish mixture. Sprinkle in salt and cayenne pepper and stir until thickened, about 3 or 4 minutes. Serve over cooked rice and top with chopped green onions.