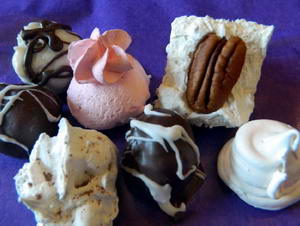 Remember that I Love Lucy show where Lucy and Ethel were working for a candy company? They had a heck of a time trying to make dipped chocolates! Along that line, I'll bet y'all have had at least one run-in with trying to make tasty candy that also turned out pretty. You may have even eyeballed the end result like it was a Picasso painting and compared to the photo in the cookbook.

I know because it's happened to me where the candy was either vicious looking but good tasting or vise versa. Well, I've got a couple of easy recipes (with a zillion variations) for making great tasting and great-looking candy.

Now, before we get to the recipes, I always like to fill y'all in on a little history about the food you're gonna be making. So, here goes.

A Brief History of Candy

First, the English word "candy" actually comes from the Arabic "qandi", which means something made with sugar. Second, you've probably heard the song about a spoonful of sugar helping the medicine go down, but that's just about the truth of the matter. According to food historians and the medical gang, many of the first sweets were used as medicine.

Licorice, marshmallows (made from the marsh plant "mallow") and peppermint candy were used for digestive problems. Some say that's how after-dinner mints came into play -- well, that and maybe some bad breath.

Jujubes were used for sore throats. And, one of our all-time favorites, chocolate was used for exhaustion and mood enhancement. We now know that chocolate is also full of flavonoids that increase antioxidants in the blood that protect against heart and blood vessel damage, as well as some cancers.

So, see there; candy's good for what ails ya!

Now, I know there are a lot of easy-to-make candies out there, but two in particular are so versatile flavor-wise and nearly impossible to go ugly-bug on you that I thought we'd make them. One is my poor-girls' version of Chocolate-Dipped Liqueur Truffles, which is loosely based on my mother's rum ball recipe. The ingredients are cheap, but the results are amazing.

Divinity is an old Southern sweet that can be shaped.
The other is Divinity, which when made with pecans, is considered southern divinity. It's a member of the marshmallow/nougat candy family and a very antiquated sweet that can also be shaped. And, if you have a pastry bag with a wide-opened metal piping tip or two, you'll turn out results that will rival Godiva. So let's make some pretty candy!

Divinity is very easy to make but requires a low-humidity day. A variety of extract flavorings, chopped nuts, hard candies such as peppermint and chocolates, or fruits such as cherries can be incorporated into the basic divinity mixture with the final product being dropped onto waxed paper using spoons, shaped using a pastry bag, poured into a waxed paper-lined pan to make fudge squares, or rolled in nuts to make a candy roll.

You'll also need a candy thermometer, two spoons for dropping the candy or a pastry bag and tips or a waxed paper-lined pan.

Place the egg whites in a medium-size mixing bowl and set aside. Combine the corn syrup, water, sugar and salt in a medium-size saucepan over low heat and stir constantly with a wooden spoon until the sugar is dissolved and the syrup is smooth and no longer grainy.

Increase the heat to medium-high and cook without stirring until the syrup reaches a rolling boil. Clip the candy thermometer to the side of the pan (make sure it doesn't touch the bottom of the pan) and reduce the heat to medium to continue a steady boil without stirring. While waiting for the temperature to reach 252°F, beat the egg whites until soft peaks are formed.

When the candy reaches 252°F, remove the syrup from the burner and set aside for about 30-seconds until the boiling ceases. With your mixer on high-speed, begin to beat the egg whites while pouring a thin, smooth stream of syrup into the egg whites, avoiding the beaters as much as possible.

Do not stop mixing, and don't try to scrape any remaining syrup from the pot because it will have hardened too much for mixing. Continue to beat until the mixture loses its gloss and forms stiff peaks, about 3 to 5 minutes. (If the candy isn't forming firm peaks, blend in two tablespoons of powdered sugar and let it rest for a minute.) Add the vanilla and mix just until incorporated.

Choose your method of dropping, shaping, rolling or pouring into a pan and, if you wish, top with a nut, fruit slice or whatever suits your fancy. If the candy hardens too much while you're working with it, you can blend hot water, one tablespoon at a time, until it reaches a fluffy consistency. Allow the divinity to set for about 2 hours. Store in a air-tight container lined with waxed paper for up to two weeks. Divinity can also be frozen. Makes about 40 pieces.

A few drops of food coloring, added after the hot syrup, will turn your divinity into a lovely pastel confection.

The mere mention of the word "truffles" conjures up images of delicious decadence, and for good reason. But delicious doesn't mean difficult. Making these truffles is more fun than troublesome. Crumble the pound cake into a large mixing bowl. Add cocoa and choice of liqueur and mix until all cake is dissolved. Add in any optional ingredient such as cherries or nuts and mix until well blended.

Roll into 1-inch balls and place on waxed paper. Melt chocolate barks, separately, in your microwave, according to package directions. (If using white chocolate, you may stir in 2 or 3 drops of food coloring for an added decorative look.)

Place each ball onto the center of a fork and dip into the either of the melted chocolates, allowing the extra chocolate to drip through the tines of the fork. Place the truffle on waxed paper and let dry. Continue this process until of the truffles are dipped and dried. The opposite flavor of chocolate bark can be melted and drizzled, using dipped fork tines, across the dipped truffles. That is, you can have dark chocolate-dipped truffles drizzled with white chocolate, or white chocolate-dipped truffles drizzled with dark chocolate. Truffles can also be rolled in chopped nuts or cocoa.

Allow truffles to dry and place between layers of waxed paper in an air-tight container. Will keep for up to one month in the refrigerator. Makes about 50 truffles.